Before anything else, I just want to give thanks to Robin, who opened Afton Station for me on Monday even though she was ill.   I guess I didn't realize how ill she was until I found these in the wastebasket yesterday.  She had told me she was losing her voice, but I didn't know it was that far gone. 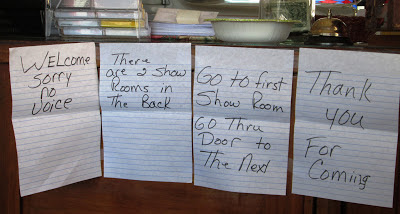 She simply held up the appropriate paper to guide visitors through the showrooms.  That's loyalty for you!  Thanks, Robin!

Ron M. and I arrived yesterday at 7:30 a.m. and Tattoo Man appeared just moments later.  We were there early to meet and greet the annual visit from George Higgins and his Mother Road Rally, a cross-66 motorcycle ride that attracts people from all over the country.   Although his group wasn't as large this year (48 this year, over 100 last year), they were a great bunch, as usual.   They always take a group picture in front of the Station. 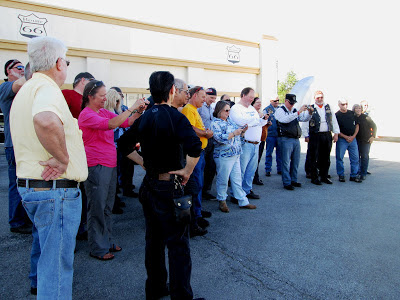 Their bikes make quite a display along the street in Afton, and at that early hour, they attract a good bit of attention. 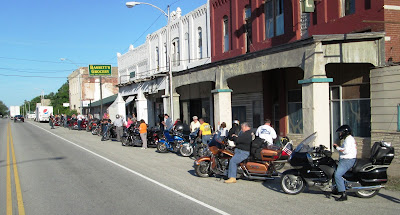 George (left) signed the guest book on behalf of everyone, while others shopped and oogled the cars. 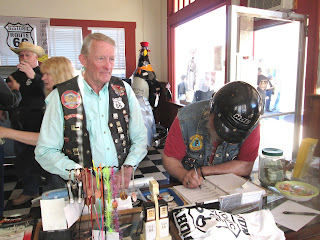 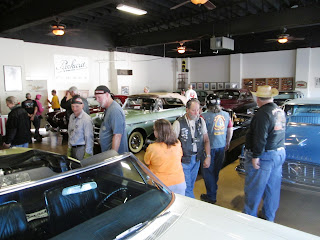 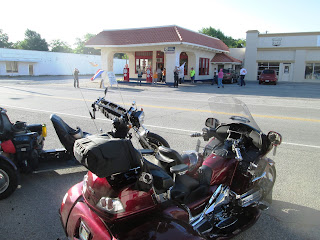 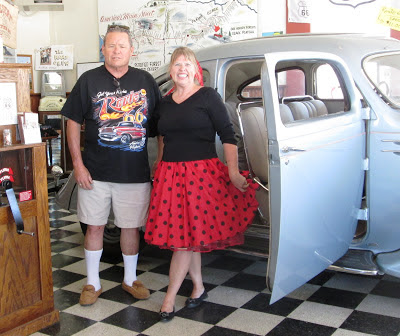 This couple from Oceanside, CA had to be the most interesting and most devoted travelers of the day!  She told me she made different '50s inspired outfits for every day of the trip!  She said that when she wants to get the most out of a vacation, she goes all the way!   She even has crinolines under her skirts.  I remember wearing those in my younger days  and how uncomfortable they were to sit on, and after traveling several hundred miles a day, she agreed! 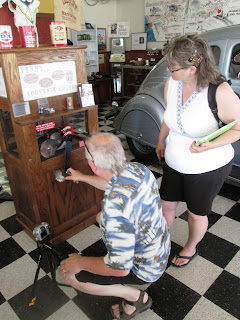 This couple from LaPorte, IN get the Coolest Vehicle of the Day award.   They're using their VW bus as transportation and accommodations for their trip.  With no air conditioning, it's becoming a very hot expedition, but they're not letting that stop them from heading west. 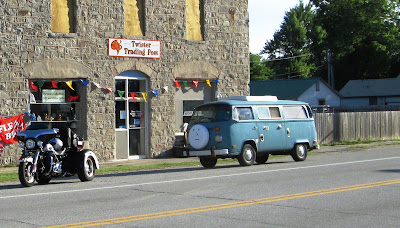 I was expecting a t-shirt delivery near the end of the day, but my wonderful "shirt guy" was a little bit late, thus we were a little bit late getting home.    It was a long day!!!    The shirts are great as usual, and we now have a full stock of all adult sizes.  Come and get 'em!
Posted by Laurel at 2:46 PM

Hooray for busy days! And such enthusiastic visitors. Love the lady who dresses '50's for a 66 cruise. Tell, where and what is the Twister Trading Post?

Thanks, Susan! Twister Trading Post is a new flea market type place. I haven't been in there yet, but those who have say it's pretty good.

We saw the VW travelers during the Il Motor Tour as well! Hope to see you during the Joplin Festival!
-Josh Friedrich

I'll be in Joplin for at least one day, Josh. Will be nice to see you.

The VW travelers stopped by Afton Station again on their way back east. Nice people!