Project of the Day:   Well, it seems that somehow yesterday our toilet (or loo, or stool, or terlet, or porcelain throne ... take your pick) had a major failure.  It came unseated from the floor and flooded the bathroom.  We could have resealed it, but we've needed a new one anyway, so off went Marly to the local Lowe's and came back with a much sturdier one. 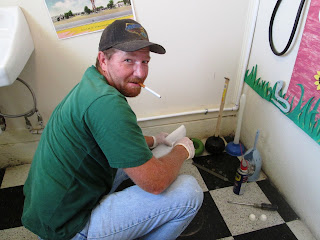 He then removed the old one and installed the new one.... while never letting up on potty jokes as he labored, of course.  Here he is, having removed the old appliance.  ( That's an electronic cigarette in  his mouth.) 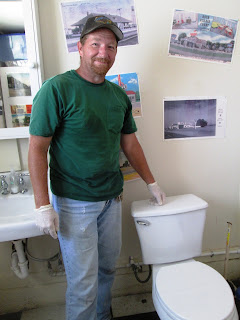 And here he is, looking proud, with the finished product.  Thank you so much, Marly.  What would we do without you?!

With the crisis averted, Ron M. and I cheerfully greeted a number of cool visitors, beginning with these two gentlemen from Anglesey Wales,Great Britain.   Old friends for decades, they are "doing the Route" and will meet their wives, who chose to fly, in California.  Betty even invited these jolly guys to sign her cast! 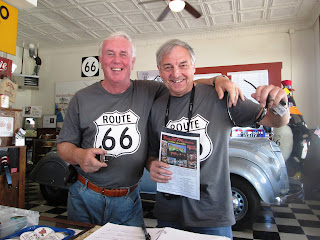 Later in the day, this father and his two grown children from Perth, Australia came to visit.  Once again, their enjoyment of the trip was contagious and made our last hour of the day ever so pleasant.  The father is originally from South Africa.  He wanted his kids to experience a drive-in movie while in the U.S., and since they expected to spend the night in Tulsa, we guided them toward the wonderful, iconic Admiral Twin.  I have no doubt that they'll have a super evening!   The new Superman movie is playing! 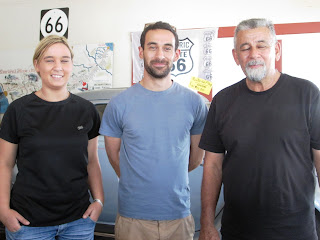 The folks from Pinehurst, NC have a daughter named Afton, so they bought just about everything we have that bears that name.  His father is also named Afton, so they bought doubles of most things.   Dugger, the fellow from Claremore, OK supplies some of the items I sell and  he also has a new coffee house/ Route 66 souvenir shop which sounds just wonderful    When in Claremore, be sure to visit "Mr. Rogers' Neighborhood".   Dugger is a fine fellow. 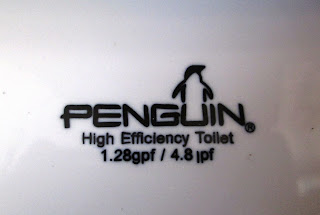 P.S. -  Tripper is thrilled by our new potty because his photo is on it.  Now we have a porcelain penguin as well as a fiberglass one!

I hope Marley doesn't really smoke. I suffer from asthma and already know how it feels to not be able to walk across this room because I can't breathe well enough.

Marly quit about 2 years ago, but still uses the electronic cigarette. I quit 39 years ago, cold turkey, and haven't had a puff since. There's not one good thing about smoking.