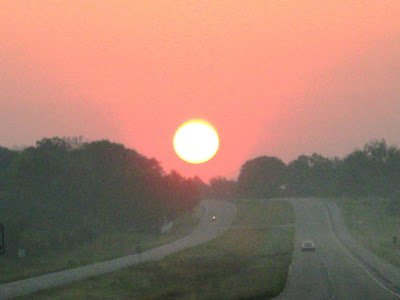 The sunrise was a gigantic blazing ball as I was passing through Chelsea on Route 66 this morning. Driving past the Chelsea Motor Inn, I noticed cars outside of all of the rooms. I wanted to shout, "C'mon, people! It's 7 a.m.! Time to get on the road and see the incredible morning sunrise!" I can't imagine missing a sunrise when I'm on vacation. But maybe that's just me. :-)

I opened Afton Station at 8:30 and had eight visitors by 9:30 -- four from Australia, two from Wisconsin, and two from Kentucky.

I'm very nervous about the guys scavenging stuff (beams, rocks, wood) from the semi-collapsed building across the street. They're not even wearing hardhats and it looks like the rest of it could cave in at any moment. 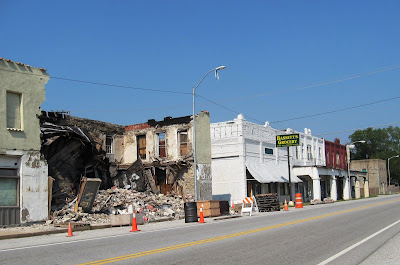 I'm home now, and what a day it turned out to be! I was by myself all day, except for a while when Betty W. and her sister Marlene stopped by and brought me something great, but more about that later.

A very nice young fellow named Derek, an employee of the Buffalo Run Casino in Miami arrived around 10:00 to set up for a Poker Run that was scheduled to come by today. The trouble was that nobody had told me that they were stopping at Afton Station (or perhaps I just never got the message). No problem, though. I always welcome this sort of thing, so I set him up with a card table and then we waited. By the end of the day, only 9 people showed up for the Run. Derek said that since it was the Buffalo Run's first attempt at this sort of event, perhaps the word hadn't gotten out. Clearly, the next time they need to get out more advance publicity. At any rate, I got to spend some time with Derek and the few people who did stop in to participate in the Run, so it was all good.

On the other hand, just about everybody else came to Afton Station today. By the end of the day I had greeted 55 people. The Tulsa Gold Wing Club arrived around noon, with their usual beautiful, luxurious motorcycles and smiles on many faces. They're a very friendly and generous group. With them was Eric Jones, a fellow Route 66 enthusiast. I believe it's his third visit to Afton Station.

Betty and Marlene had spent the morning scrounging for bricks over in Vinita. As you may recall, after the tearing up of the main intersection there, lots of the bricks that used to be the roadbed for the original Route 66 were set aside for collectors or anyone who might want them. Betty and Marlene found two beauties, and they were kind enough to donate them to Afton Station.

This brick came from the old Buffington Hotel that stood on the corner of Route 66. They identified it by the one side that is painted purple, since toward the end of the hotel's life, it had indeed been painted purple! 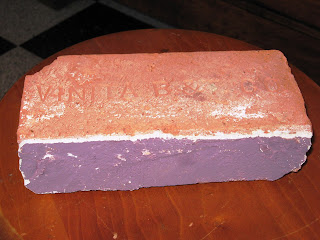 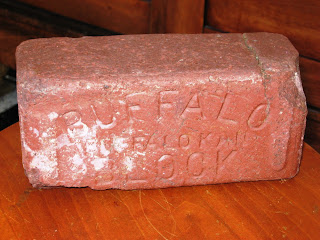 Finally, here's a beautifully painted 'Vette that stopped in this afternoon. They were a bit late to qualify for the Poker Run, but they were having a great time on a beautiful day nevertheless.

That does look pretty dangerous. I hope no one gets hurt...but I'd probably be scrounging for a souvenir brick or two myself!

Friday as I was going home from work, I was riding my 'cycle. I stopped at Pop's to get some gas and those "HOG's on 66" riders were there. There must have been a 100 there at Pop's and many more riding by on the highway.

Sure wish I could have joined them. (sigh)