As far as the eye can see. That's how many motorcycles visited Afton Station today. This was the Ride for the Relay group, http://www.ridefortherelay.com/, conceived and led for the last five years by Rodger Fox and making their second visit to Afton Station. The group is made up of cancer survivors and others sympathetic to the admirable cause of wiping out the disease. This year there were 50 people on 31 motorcycles driving across Route 66. We've had larger numbers of bikes here before, but so many of these were towing trailers that it made their procession very, very long. They stretched from Afton Station all the way down Route 66 in both directions, as far as the eye could see. Check it out!

The Ottawa County Sheriff led the parade into town with flashing lights and sirens, followed by Dean "Crazy Legs" Walker in his truck, their "unofficial" guide. Rodger was on his beautiful Honda bike adorned with the message this group was hoping to impart. 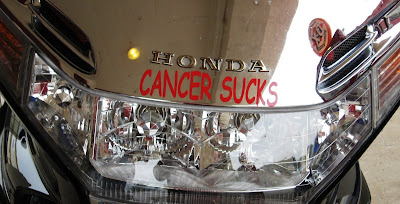 The group stayed for a while, milled around and chatted both inside and out, bought some merchandise, and formed a prodigious line at the restroom. Look closely and you'll see Ron "Tattoo Man" Jones disrobing to display his tattooed back, with a small camera-wielding contingent taking advantage of the opportunity to photograph the phenomenon. 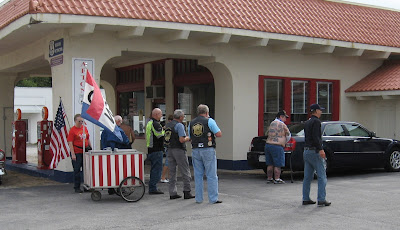 Many of the visiting rigs were very specially decorated. Here's a beautiful example. 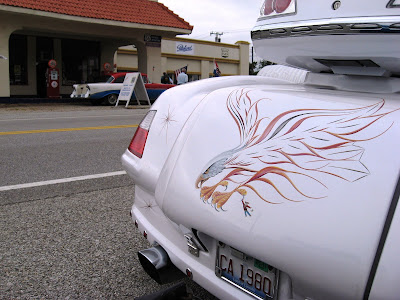 We had been told that the group would arrive at 8 a.m., so I arrived at 7 to get ready, and Tattoo Man followed at right about 8. The group didn't show up until after 10, but that's ok because by then we'd already had a good number of visitors. In fact, it was another very busy day today. They came from Ottawa Canada, Toronto Canada, Venice Italy, Cypress TX, Gladstone MO, Zurich Switzerland, Garden Grove CA, Joplin MO, Louisville KY, and Vinita, Grove, and Fairland, OK. The final visitor total was 70. Not bad for a Tuesday! (Thanks to Marly for taking all the photos here.)

A special visitor was my ex-brother-in-law John Kane from Kentucky. He drove up to go fishing with David this weekend, and he surprised me by stopping in on his way to David's house to spend about an hour at the Station. Always nice to reconnect with John.
____________
Robin did a wonderful job on her first day toiling at Afton Station yesterday! Marly stopped in to make sure she hadn't gone insane, and reported that she had the situation well in hand in my absence. She had a pretty busy day, too. There were visitors, according to her notes, from St. Petersburg FL, Switzerland, Pleasantville MS, Silverdale WI, Kansas City MO, Indiana, Lapee MI, Miley WI, Olathe KS, and CHecotah and Owasso OK.
Posted by Laurel at 5:51 PM