The door is open today, with real honest-to-goodness cool air blowing into Afton Station. It's an impressive beginning to what is predictd to be a perfect weekend. That the hurricane failed to blow away the East Coast of our nation yesterday should make it a fine Labor Day weekend for everyone in the country.

As for me, I'll be working at the Station today and tomorrow, and then of course dialysis on Monday, since dialysis doesn't allow for holidays. I'm thinking I could really use a vacation. It's been more than two years since I've been away for more than a rushed 3-day weekend, but it's just too much of a hassle to get dialysis in unfamiliar places, and besides, what could be more fun than being right here greeting travelers?

My new hire, Robin, was unable to work on her first day yesterday, so Marly and Tattoo came, as did a mere 10 visitors -- from the Netherlands, Ohio, and Oklahoma.

So far this morning, travelers have come from Itzehoe Germany (near Hamburg), Paris France, and Choteau and Broken Arrow, OK. It's only 11 a.m., so I'm sure there will be more. Until then, I'll sit here and make magnets (which tend to go out the door as fast as I make them) and eat some red grapes for breakfast.
______________

I'm at home now, having met twenty folks at the Station today. Besides the ones I mentioned above, there were also people from Mesa AZ, Miami OK, Lowell AR, Garfield AR, Vinita OK, Coweta OK, and Phenix City, AL. Here are the Phenix, Alabama folks, who are blogging about their Route 66 trip and seem very enthusiastic about it. 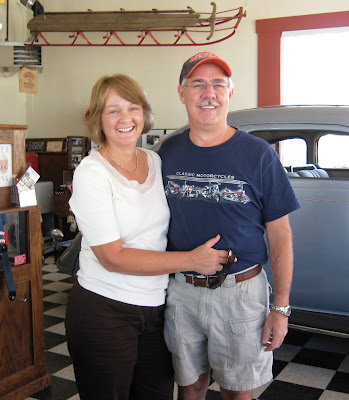 This gentleman from Mesa, AZ is a collector of old gas pumps so of course I needed a photo of him (with his son) in front of ours. 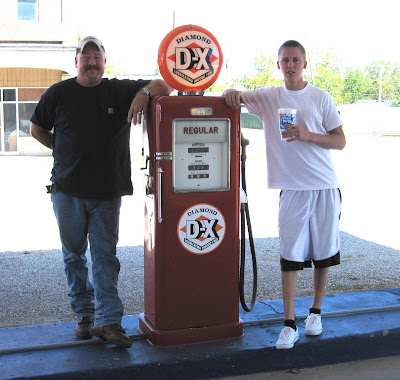 Some bikers from Arkansas came in toward the end of the day. One of the guys has visited Afton Station about 4 times in the last month and brings new friends with him every time. That the way to get the word out!
Betty W. was with me for a good part of the day today. Marly was nice enough to drive over to Afton to help me close at the end of the day.
_____________
In the 24 hours since the Admiral Twin Drive-In burned, over 15,000 people have joined the "Save the Admiral Twin" Facebook site, where donatioins are being solicited to rebuild the screen. Word has been sent out to the stars of "The Outsiders" which was filmed there, and several have already responded. When I passed there on the way home from Afton, there was quite a bit of activity there, where a table had been set up to sell t-shirts, with proceeds going to the "Save. . ." effort. It makes me so proud of my adopted city of Tulsa. The people here rally around their city and each other at the drop of a hat. It wouldn't surprise me a bit if they were able to raise the $300K+ that will be needed to rebuild the big screen.

What was the name of the man from Mesa?