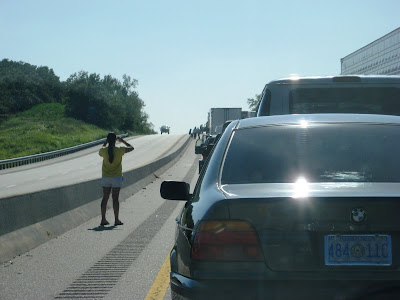 My blog is a little later than usual tonight, and will be somewhat abbreviated. Ron M. and I were trapped in a traffic tie-up for about 45 minutes on the way home from Afton due to an overturned travel trailer which burned. Hanging in traffic on a hot day is frustrating, but I'm sure not nearly as frustrating as losing one's RV to accident and fire. What a way to ruin a nice vacation! Anyway, there was another shorter traffic snarl closer to Tulsa which delayed us even more. That's what I get for hopping on the interstate instead of taking the kinder, gentler Route 66. Shame on me!

Afton Station was fairly laid back for a Saturday. Ron M. is back from his vacation and was with me today. Tattoo Man also helped out for several hours. It was a beautiful day, the first time since the beginning of the summer heat wave that we've been able to sit outside. Nice! We ended up having 21 visitors, but a good many of them arrived near the end of the day. They came from Shelton WA, Columbus OH, Hilliard OH, Miami OK, Grove OK, Fayetteville AR, Salina OK, Newark OH, and Madison MO.

Here's Ron M., chatting with the folks from Ohio as they peruse the goodies for sale. 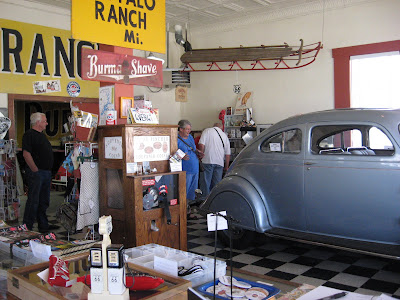 The one visitor that I was expecting and anticipating never showed up. Jamie Mixson, who is riding his bicycle across the country, was definitely supposed to arrive today, and I was looking forward to it since he's from my own home town near Cleveland, Ohio. I communicated with him just this morning and he indicated he'd be there, so I do hope nothing happened to cause him to have to abort the trip or be unduly delayed. The "Ride, Jamie, Ride" project must go on!

Just wanted to say, the old Route 66 sign is on the auction block I heard. I'll try to find out more.

Do you know of a boat for sale?

I love the fins and design of the boat

We also visited the museum with custom cars nearby ...