Although yesterday wasn't overly busy, today made up for it, as a heaping helping of Route 66 holiday travelers stopped in to Afton Station today. I thought I was going to be handling things by myself, but as it turned out Tattoo Man and Betty B. both came by and both stayed for a good part of the day. It made crowd control much easier.
I arrived very early around 8 a.m. and this couple was parked in front of the Station and looked like they'd like to come in, so of course I invited them to do so. They were from Palmyra, Indiana, and were extremely good guests. Our conversation, held as I was turning on lights, putting out signs, etc., was a great way to wake me up. And that was only the beginning! 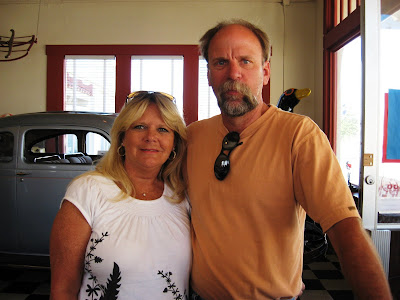 The fellow from Larkspur, Colorado was accompanied by an old friend he recently reunited with through Facebook, as well as two of his very cute pets. Here are Paco, a chihuahua, and Leon, a English bulldog. Believe it or not, the two pups are best of friends despite a rather large size variation. 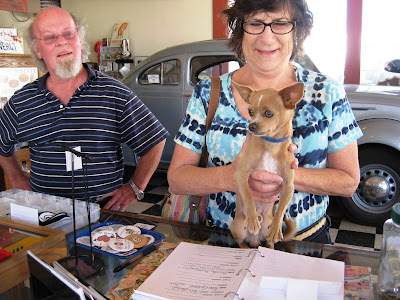 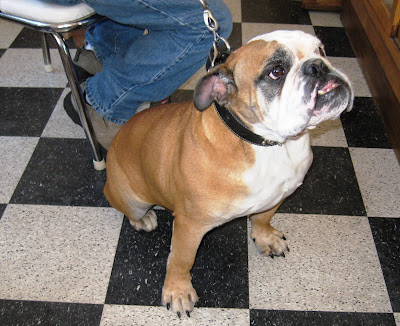 These three fishermen were a hoot! They stayed for a long time, while I kept reminding them that it was getting close to noon and the high sun would surely be sending the fish too deep to be biting by the time they got around to getting to their fishin' hole. I think they were having so much fun just hanging around in Afton Station and talking and joking that they really didn't care much if they ever did get to the lake. They were from the towns of Cloudy and Lukfata, OK. Since I'd never heard of either town, I got out the atlas and made them prove that the little burgs even existed. The guy on the left even invited me to a fish fry at his house next Friday in Cloudy. I suspect he felt confident that I'd never show up because even with map in hand, I'd probably never find the place! Besides, I doubt they ever made it out to the lake to catch anything anyway. LOL! 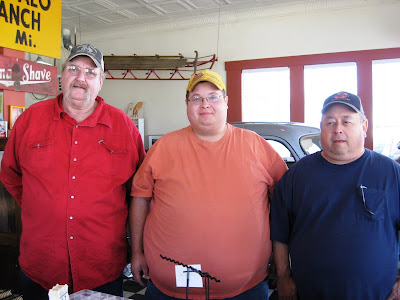 I'm ready for a little rest, so although I could write entire chapters about all the fun and interesting folks who visited today, I think instead I'll turn off the computer and maybe turn on the TV and veg for the rest of the evening. Tomorrow is another day.
Posted by Laurel at 5:22 PM