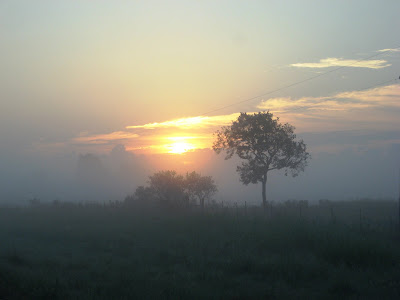 . . . I headed for another lovely day at Afton Station. There was a bit of fog on the land, but nothing prohibitive of a leisurely trip down Route 66. Once I arrived, a very quiet morning gave me some time to close out last month's books. August turned out to be very busy, as I'd expected, far overtaking August of 2009.

September started out with a bang, too. Marly and Tattoo held down the fort yesterday, and they greeted folks from S. Africa, Denmark, Germany, and the U.S. while awaiting the big motorcycle group from Norway which was to arrive near the end of the day. The Norwegians were just a bit late and soaking wet, due to a huge rainstorm in northeastern Oklahoma. This photo of some of the bikes, taken by Marly, shows that the rain hadn't stopped when the soggy-but-resilient Norse men and women arrived. That was obvious this morning when I looked at the pages of the guest book and noticed that they were all smeared, curled up and wrinkled! There were about 65 visitors in total yesterday, 57 of them with the Norwegian group. 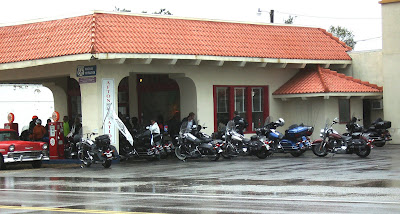 Today wasn't as busy as yesterday, but it was certainly busy enough! Marly was there off and on all day. It's sunny and not too hot (for a change), with no sign of the rain we were supposed to have. At least not yet. Our guests came from Wheatland MO, Guyman OK, Clarksville AR, Lawrenceville IL, Springdale AR, Tahlequah OK, Buenos Aires Argentina, Cordoba Argentina, and the west coast of Norway. Here's the couple from Illinois who are exploring Oklahoma Route 66 this week on their motorcycle. 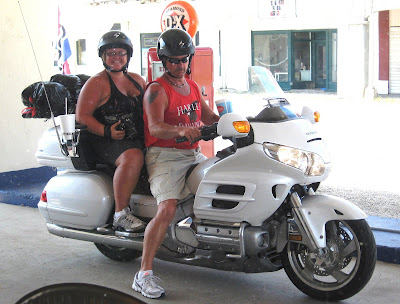 I was so happy to have a visit from Jon Edwards. The last time I saw Jon he was recovering from a bad motorcycle accident and was dependent on a cane. Today he walked in on his own, accompanied by his grown son Jon. They'd come on their motorcycles! Jon was looking good, and it was fun to meet his son. 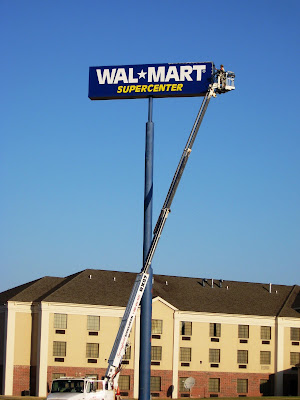 I have no idea why I snapped this particular photo this morning in Vinita. I'm no fan of WalMart, but there's always something compelling about men on a gigantic bucket truck.
Posted by Laurel at 5:15 PM