Today David, my ex, invited his son's kindergarten class to visit Afton Station, eat some hot dogs, and take rides in some of the old cars. That put me in self-defense mode (or actually, more of a "museum defense" mode) right from the start, but it all turned out ok. David served the food in the car museum portion of the Station, and when the kids did come over to my side, they were well behaved, and all of them were with parents. Mostly, they wanted to use the pressed penny machine. The kids seemed to be loving their rides in the rumble seat of the '34. 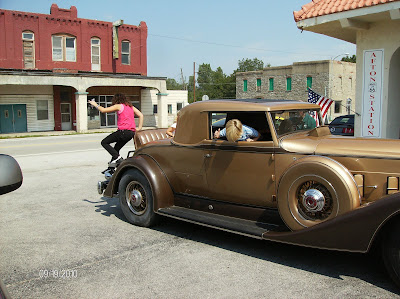 Nevertheless, I was a little on edge all morning. We were also expecting a group of rented late-model Mustangs being driven by an Australian tour group and I wasn't sure how this was all going to mesh. But mesh it did. Ron M. was with me all day, and Betty W. hung in there for quite a while, too. As usual, Marly was great help on both sides of the Station. The Australian group arrived right on time, and there were 15 of them on this visit. I'm convinced that Aussies are the most fun-loving and cheerful of all our international groups. 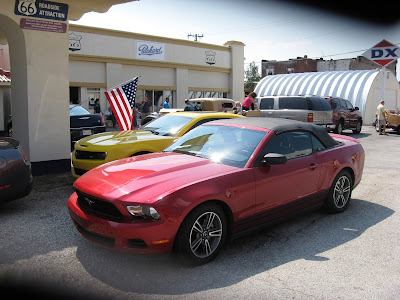 On the other hand, our other visitors from foreign countries today -- a couple from the Netherlands and a couple from the Czech Republic -- were also having a ball and were fun to talk to. The Dutch folks spoke perfect, unaccented English. Amazing! The young Czechs were fun, and were excited about heading back to Chicago after a 6-week tour of Route 66.

Other visitors today came from Nowata OK, Hutchinson KS, Landrigan TX, Bartlesville OK, Indianapolis IN, Florissant MO, and Neosho MO. Everyone was understanding about the children and the fact that some of the cars weren't available for viewing. Long-time friend Jim Griffin and his wife Sherry from Frisco, TX were in the area and came over to help David with the kindergarten party. It's always good to see him. John, one of the technicians at my dialysis unit, came up with his girlfriend to finally check out the Station, too. 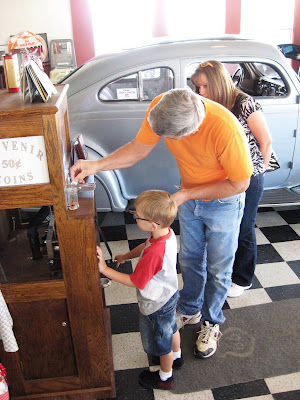 Ron took this photo of the interior of Bassett's Grocery. I haven't asked him from which window he took the picture, but it puts a new perspective on the ruins of the once vital grocery store. 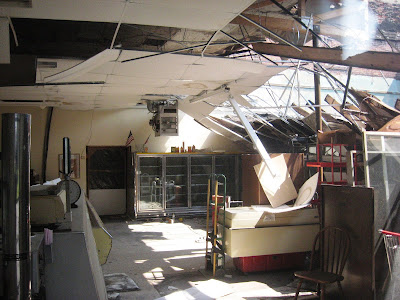 I'll be back on Tuesday with more fun and games!
Posted by Laurel at 5:47 PM