Aussies, Michiganders, Dutch... and a tractor!

Interesting people just kept coming in the door of Afton Station today. I've often said that this job is a whole lot of fun, but have I ever told you that it's also educational? Some days we learn more than others. Twenty-six visitors today included an abundance of Aussies, Michiganders, a fascinating Dutch couple, and. . . tractor fans! Yes, tractor fans.

Have a look at this beautiful 1935 McCormick-Deering, the first diesel tractor on the market, originally shown at the 1938 Chicago World's Fair. 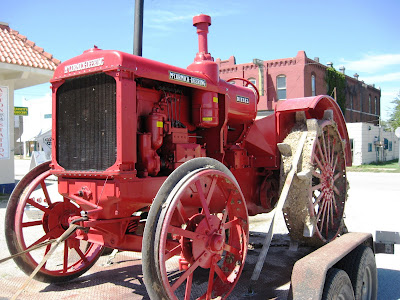 A gentleman from Powderly, TX, returning from a big vintage tractor meet in Missouri with his four sons, educated us a bit about tractors, a subject Ron M. and I had to admit hadn't previously been on our radar. The collector restored this beauty from a rusty hulk many years ago, and it's one of many in his collection. Coincidentally, a fellow from Dearborne, MI came by a bit later, and he was also a tractor collector, although not returning from a meet. He was more of a John Deere fan, however. 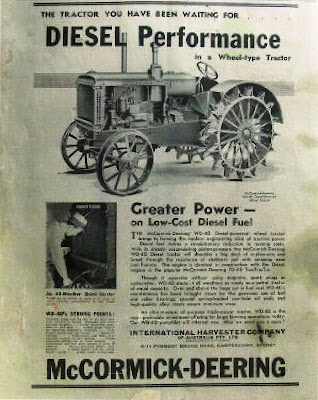 Early McCormick-Deering ad for the model we had at the Station today.

We also had two separate groups of visitors from Melbourne, Australia. These three "mates" were incredibly friendly and so enthusiastic that they were just fun to have around. And shortly after they departed for their full Route 66 adventure, another couple from Melbourne arrived. They were equally pleasant and inquisitive guests. (I've made a decision. I'm moving to Australia and becoming a tractor collector! LOL!) 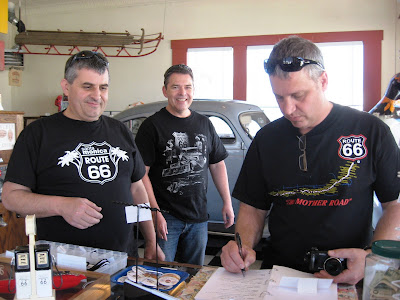 These two great guests were waiting for us when Ron M. and I arrived at Afton Station this morning. They are friends from Lebanon, NH and Ray, MI and I had been told in advance that they were coming for a visit on their way west on 66. They were extremely interested in the cars and went away impressed by some of those in our collection. Another personable pair. 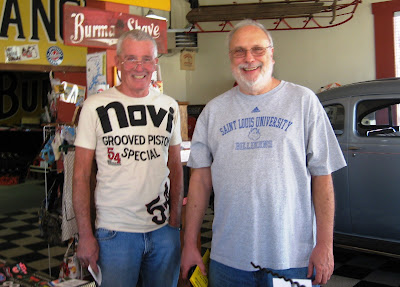 A couple from the Netherlands, on their second Route 66 holiday, were most interested in the cars, since the husband was an automobile mechanic through his entire working life. He has an extremely large collection of vintage motorcycles, so we sent them off to Vintage Iron, the fine motorcycle museum in Miami which they'd missed on their first time through the town. They left happy.

Along with all these fine guests, we were equally excited by visits from folks from Ludington MI, Overland Park KS, and Claremore, Vinita, Pryor, and McAlester, OK. It was a fine, energizing day. . . and no traffic jams on the way home!