When I was a little girl in Cleveland, Ohio we'd go to an amusement park on Lake Erie called Euclid Beach. Sadly, it's gone now, one of the last old wooden-rollercoaster / dancing pavillion parks. My favorite ride was the Laff in the Dark, a long, inky black tunnel where ghouls and goblins of all sorts would pop out suddenly to scare the pants off us kids as we rode through in little wooden boats. Between the scary pop-ups there was manufactured lightning -- constant, unrelenting bolts coming at us from all sides with the accompanying deafening cracks of thunder.

Today's drive down Route 66 to Afton Station was just like that, for the entire drive was done in total darkness broken by constant, unrelenting bolts of real lightning illuminating the sky every few seconds with massive cracks and booms, and then total darkness again. It was quite spectacular, albeit a little frightening. Nevertheless, after a stop at Clanton's for breakfast, I arrived at Afton at 9 a.m. moments before the sun burst forth. Such funny, funny weather -- it never ceases to amaze me.

It was a bit chaotic at Afton Station today, and it turned out to be a very LONG day. Marly is home from his fishing trip and was there most of the day. Betty Baumann also came along around noon, and stayed for the rest of the day as well. We closed almost two hours late today... but more on that later.

Zdenek, who heads up the Route 66 Association in the Czech Republic, brought another group of 18 with him today. In April, he was here with a slightly larger group. He acts as a tour guide and has done a great deal to promote Route 66 in his country. This group arrived on motorcycles, in cars, and in Zdenek's Route 66-adorned van. I was not expecting them until Dean "Crazy Legs" Walker called late in the day to say they had just left Galena, KS and were on their way to Afton. They didn't arrive until almost 4:30, but Marly, Betty, and I stayed until they got there.

Although almost no English is spoken by the group (and I sure as heck don't know any Czech!) it was a quiet visit until the group discovered the squashed penny machine, which was quite a hit. Here are some of the group attacking the machine. 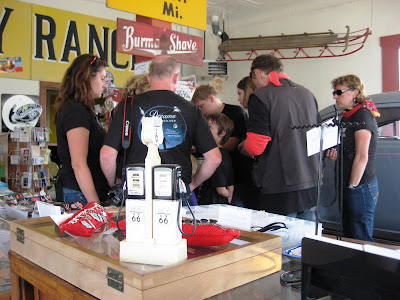 I managed to get a shot of several of the Czech visitors as they were about to leave. Zdenek is in the middle with the light colored shorts. 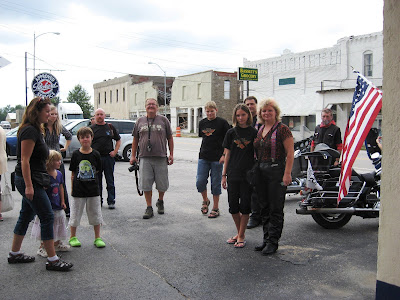 I'm sure I've forgotten some interesting details about today, but I'm tired and rushing. I'll be back on Thursday, when a huge number of Harleys are scheduled to arrive. Should be fun!
Posted by Laurel at 6:40 PM

I think I saw them passing through OKC.
Sure wish I could have joined them.

Glad the weather cooperated and it ended up being a nice day.