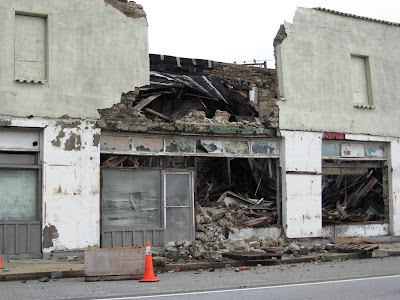 As you have seen numerous times in photos on this blog, the historic block across the street from Afton Station needs help. It needs love. It needs caring. It needs commitment in the form or dollars. I've been hanging here for 10 years, assuming that eventually someone would come along and want to restore all or part of it. The old Palmer Hotel. The Pierce Harvey Buggy Company (1911). Bassett's Grocery (1922-2009).

But the reality of the fragility of this town, which was established in 1886, was pounded home to me today as I drove here and glanced to the left as I approached Afton Station. The building directly across the alley from Bassett's is going down. I knew it had to go, and I'm not sure if the high winds last night finally did it in or if someone was doing demolition when I wasn't here yesterday, but it's definitely on it's way to oblivion. It was near death before, but now the front wall is crumbling onto the street and sidewalk. And although this particular building isn't as historic, nor in as good shape as it's neighbors, I fear that it's demolition is a harbinger of things to come. With enough cash and/or love, this block could be reworked into something great. Otherwise, I fear I'll soon be looking out the window of the Station at a large vacant lot, or a gigantic pile of rubble.

Oh, how I wish I could buy these buildings myself, but it isn't in the cards. I do have the phone numbers of their owners however, and will gladly give them to anyone who might want to talk to them about keeping Afton alive. I'm sure most of us have said, at one time or another, "If I won the lottery, I would (fill in the blank)". My answer is SO easy. I would buy that destitute and loved row of structures and allow them to remain a part of the history of Route 66. Anyone won the lottery lately?
______________

Robin indicated that yesterday was very slow, with only 6 visitors. That undoubtedly had to do with all the rain. Once again, it's either feast or famine in Oklahoma, as weeks of drought have given way to flooding. . . all in 24 hours. Today, it's only 10 a.m. as I write this, and I've already been visited by two people in an RV from Georgetown, OH and four tourists from Eisbierg, Denmark, all dodging what's left of the raindrops.
_____________

River Pilot (love his name!), a group leader from Eagle Riders, came in to discuss future tours and to get information for the Route 66 GPS software he's creating. Then, two ladies from Hamburg, Germany sought shelter from the rain. Now I'm having some "quiet time", gazing at the huge smudges left on the front windows by someone who must have been really greased up with sunblock when he leaned against the windows to peer in last night. 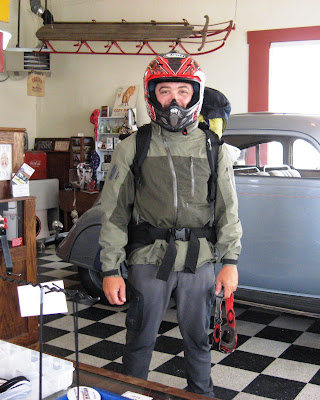 Not a space man walking on the moon, but instead River Pilot sporting his biking garb.
___________

Mid-afternoon brought a carload of five visitors from Aukland, New Zealand and a vanload of more domestic types, from Ada and Spavinaw, OK, along with Leah, a very contented Spavinaw poodle. Altogether, I saw 18 happy visitors, and on the way home, the sun finally came out! 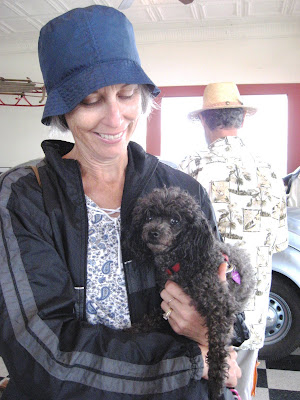 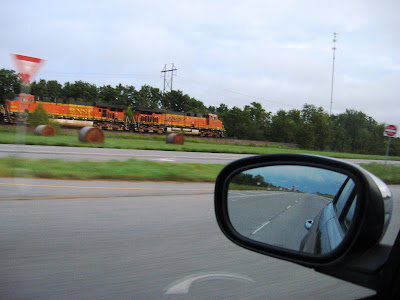 Coming and Going. I took this pic this morning. Cloudy, drizzly day, an empty Route 66, the wail of a train whistle.
Posted by Laurel at 5:35 PM