What a difference a few degrees make!

Well, maybe a few dozen degrees. Here it was -- the beginning of January, and the thermometer soared to 77 degrees today! You can't beat that for an Oklahoma winter, and it made a BIG difference in traffic at Afton Station, too. We had 7 visitors, which is about the same number we had in the whole month of December combined. Five of our guests were local, from towns surrounding Afton, and one couple came down from Joplin, Missouri, but they all said the same thing -- they were just out driving around to take advantage of the beautiful day.
I keep a "butt can" next to the front door so people can ditch their nasty cigarettes before coming in. My current butt bucket is the very large ceramic insert from Ron M.'s discarded slow cooker, filled with sand, clearly marked "BUTTS" and a Route 66 shield. Today, when we arrived at Afton the bucket was moved around to the back of the building, and all the sand was removed and GONE! There was no evidence of anyone having been at the Station, since David is in Florida and no work was being done there this week.. So, this was our big mystery. Clearly, there is a sand thief in town! Anyway, Ron went out and hosed down the windows and the area in front of the Station (I think he just wanted to take advantage of the nice weather), then he came in and did some floor mopping. Ron, I'm sure you'll be thrilled that I'm publishing this pic of my janitor. That's what 'ya get for doing a friend a favor. :-) 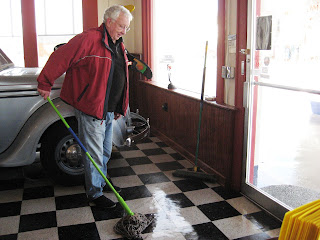 Actually, while he was doing all that, I cleaned the bathroom and did a little dusting, so I wasn't a total slug (but almost).
On the way to Afton this morning, we saw something new and kind of startling out of the corner of our eyes as we drove through Vinita. This lovely scantily-clad lass, standing on a Route 66 pedestal, was advertising a tanning salon. When we returned to Vinita on the way home, she was gone. Don't know if she was a victim of the wind, or a lynch mob from the 4-H Club. (By the way, she was a mannequin). 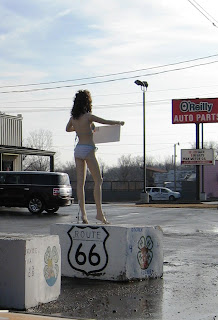 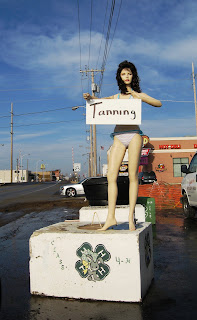 On the way home, we stopped to photograph a very photographable (which must be a word, since it's in "My Funny Valentine", right?) flea market in Chelsea. Ron hopped out and snapped a few shots of their collection of statuary. It's all for sale. Anybody need a cowboy on a bucking bronco for the front lawn? 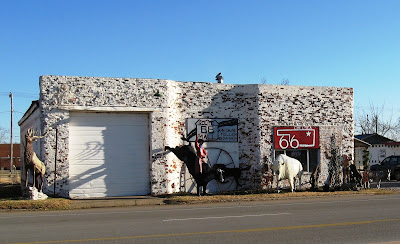 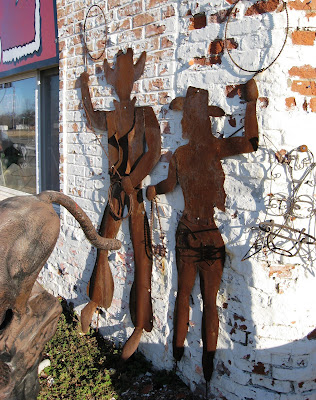 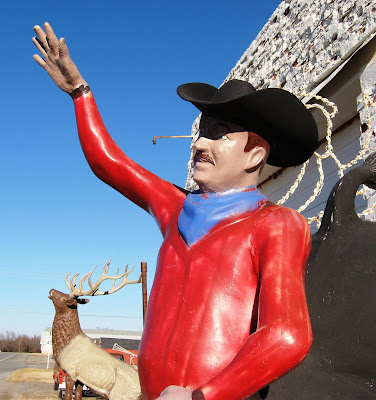 i seriously want that COWBOY for my living room !!!