Sigh..... so much to tell, and yet I don't want to bore anyone because I need all the readers I can get. LOL! But my trip to St. Louis was worth a few words. I'll be as brief as possible. It wasn't a perfect trip, but any time I can be with my family, I'm happy.

So, here goes... Friday morning, drove to Springfield, MO with no problem, but under threatening skies. Because I knew snow was coming, I decided to forego some stops I'd planned to make and just head straight for St. Louis. I did stop twice -- once on my "lucky" bridge in Riverton KS (I'm superstitious and won't pass it without snapping a picture), and then to take a quick picture of 4 Women On The Route, a very cool restored gas station in Galena, KS. The 4 Women was closed, as I knew it would be. 4 Women is where the inspiration for Tow Mater in the "Cars" movie lives. The station was bought and restored by four really neat women from Galena. http://4womenontheroute.com/Home.html The threatening skies opened up right after Springfield, and it snowed all the rest of the way. It was too cold for it to stick, but the fine, wispy snow was blinding, and that's NOT fun! The snow continued all the way to St. Louis. 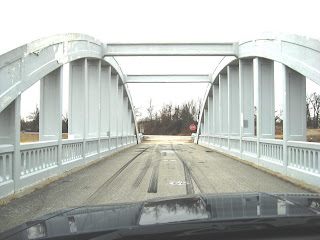 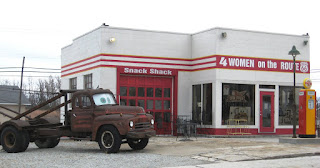 Shortly after checking into the motel, I got a call from my daughter and her family. They were stuck in Pontiac, Illinois, and wouldn't make it to St. Louis that night. They have a new Subaru, and the gas cap door was frozen shut so they couldn't get gas. They had to wait until morning when the dealership opened. I was SO disappointed! (Turns out that it's apparently a common problem with Subaru Foresters, which isn't good if you live in frigid Chicago. The dealer told them that a recall is expected.)
Since I was alone in St. Louis, I decided to drive down to Route 66 State Park and check it out. I've been there many times before, but it wasn't far from the hotel, and I didn't want to get into potential snow visibility problems, although it had mostly stopped by then. Route 66 State Park is the former Times Beach, the fascinating history of which you can read here: http://www.legendsofamerica.com/MO-TimesBeach.html. This picture doesn't look like much, but it's one of the mounds where, I've been told, the contaminated soil that was the downfall of Times Beach is buried. I also took a quick picture of the former Steiny's Inn, a Route 66 landmark restaurant which is now the Route 66 State Park Museum. 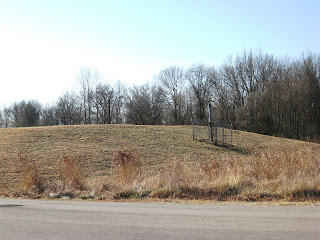 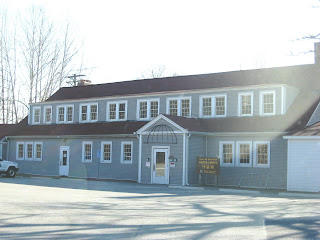 I grabbed a salad and went back to the motel for the night. Sarah, Matt, and Cody arrived around noon on Saturday. Two items on our agenda were to visit the Arch and Ted Drewes Frozen Custard (another Route 66 landmark AND home of the yummiest ice cream on the Route). On the way to the Arch, we stopped at Broadway Oyster House, where Sarah and I were able to partake of our favorite food -- oysters on the half shell. We also shared a bucket of steamed crawfish. The guys ate more ordinary fare.

By the time we got to the Arch, there was a 2 1/2 hour wait in line to get in and we just didn't have that much time (Sarah and family went on Sunday morning after I'd already left for home). From there, we drove to Ted Drewes, and it was closed for the month. Actually, we knew that, but just had to make sure because we knew little Cody would love it. No luck there. Touring St. Louis was becoming a big bust.
Back to the motel, for a swim. Unfortunately, a very large and impolitely unruly family was dominating the swimming scene to the point where it just wasn't much fun. So, we went back to our rooms and dressed for dinner.
Ah, dinner! Off we went to the Hill (the Italian neighborhood in St. Louis) for a most incredible and sumptuous dinner at Gian-Tony's. We chose it after I had taken a poll of several friends from St. Louis asking their favorites, and Gian-Tony's showed up on everyone's list. I highly recommend it.... food, ambience, service all excellent. http://www.gian-tonys.com/default.asp.
Yesterday (Sunday) morning, we did our little belated Christmas thing. We put on our Christmas tree headgear (LOL!) and opened stocking gifts right there in the hotel room. Fun, fun, fun!! (I made all those stockings.) 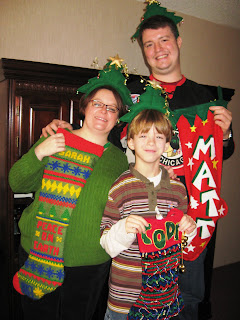 After breakfast, we regretfully parted company. Sarah, Matt, and Cody headed for the Arch before driving back to Chicago. I had a clear, easy, sunny drive back to Tulsa. I stopped to take a few pictures in Cuba, a town which has taken wonderful advantage of it's Route 66 heritage. Now known as the Mural City, there are historic murals painted everywhere. Here's a pic of my favorite. Remember, this masterpiece is just paint on a flat, blank wall. Awesome. 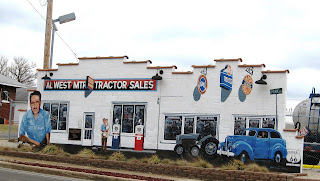 I also stopped for what might be the last time I get to see the Wagon Wheel Motel. The owners are gone now, and who knows what will become of this legendary place. 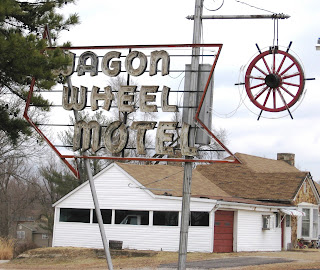 Finally, I stopped at the World's Largest Rocking Chair in the tiny town of Fanning, MO. This is fairly new, so it's the first time I've seen the 42'4" tourist attraction. The chair is almost larger than the town -- quite impressive if you like large stuff, which I do. http://rwarn17588.wordpress.com/2008/04/01/worlds-largest-rocking-chair-set-up-in-missouri/ From there, it was a straight shot home on the evil interstate. The End. 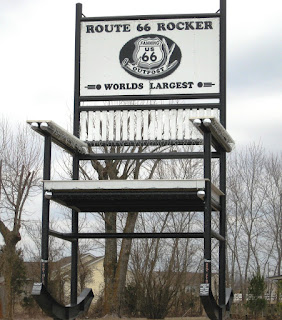 Love the oysters on the half :o)

Glad you had a good trip.

I'm sorry it was such a short visit with your family! But it sounds like you made the best of it all, and had a fabulous Italian meal in St. Louis.

Glad you got to check out some Road stuff, too--loved the pictures!