Yes, I took another road trip today. The small town of Chetopa, Kansas is just over the OK/KS border. It's touted to be the Catfish and Pecan Capital.... but they don't say the capital of what. The world? Doubtful. Kansas? Possibly. However, besides the large sign as one enters the town, I saw no sign of either catfish or pecans. I saw two restaurants, one a diner and one Mexican, both closed. I can get all the pecans I want around here, but I was getting my tastebuds ready for a catfish sandwich. That didn't happen. Chetopa has seen better days, I think, but there were a few interesting buildings. The most interesting is this old mill. The ghost signs on the front, now barely readable, indicate it was Henson's Mill, but I also saw the words "Diner" and "Corn Chops" as well. Corn chops? A local delicacy, perhaps? The mill was closed too, but the building was quite lovely.

On the way home from Chetopa, I went through Welch, OK again. I wanted to find two houses I'd been told about by both Betty and Marly. I never found the house Betty told me about in which Johnny Cash was a visitor and wrote some of his songs there. I did, however, find the big horse farm that used to belong to Roy Clark. (Yes, that's all one house!) I don't think Roy Clark still lives there now, since he now has a house just down the street from my ex-husband. 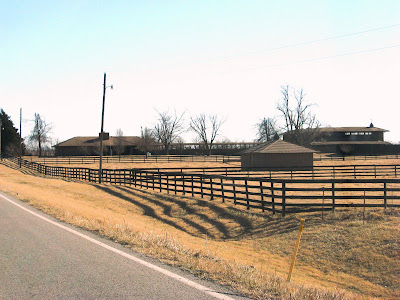 All the roads around that area are lined with huge and quite beautiful cattle ranches. And in the midst of it all, I found SHEEP! There are very few sheep in Oklahoma, and I miss them. I think I told you that we had a small flock of sheep on the farm we lived on shortly after we were married. Well, seeing a little field of sheep today made me jam on the brakes and snap this picture. My travels were slowed down a bit for a little while when I got behind a house being transported down the road. It reminded me of a similar incident when I was just a little girl (probably under 8 years old), traveling with my parents in Florida, when we lost almost a full day by getting behind a house of similar size being towed on a truck. Although today's house eventually moved to the side and let several cars pass, in the Florida incident there was nowhere for it to pull over, so we were stuck for hours. It became a family joke for years thereafter. I stopped briefly in Afton on my way home. Marly was busy working on the Citroen 2CV, and Luis was there mopping floors. Marly told me he had two visitors yesterday when he was working there. Very good!
Posted by Laurel at 3:29 PM

Corn chops? Hm, I think we need to create a recipe!

LOL at getting stuck behind the traveling house! Oh, that would be maddening. It can be bad around here on the highways because of the mobile home manufacturing in the area. You get behind one of the wider ones, and it can be a while before you can get around them.

Bummer about the absence of catfish. That does sound mighty tasty.

Near Welch (I think) was a man who made his fortune in strip mining. Johnny Cash had a song called "One Piece at a Time", about a man who worked in a Cadillac plant and snuck out "one piece at a time" until he had all of the parts necessary to build one. That man built a car like the one descibed in the song and gave it to Cash.

Johnny Cash repayed the favor. When Welch wanted to build a new community center, Cash put on a benefit concert. He paid for the center in one night.

Trevor -- Yes, I have heard that, too. I'm sure it's that house that I saw yesterday in which that song was written. I hadn't heard about Cash's contribution to the community center, though. If I'd known that, I would have looked for the center yesterday. The town is just a crossroads, so it can't be that hard to find.

The man from Welch that built the car was Bill Patch. Hopefully that helps a little bit.

It was indeed Bill Patch. One of the finest men to grace our world. Deeply missed.

Dear Anonyous,
What you posted about Bill Patch was so kind and so true. Indeed he is deeply missed. He was my husband and my hero.

Our Grandma raised 13 kids here! Came to visit every holiday (family reunions) and for short stays during summer. Fond memories - the red brick grocery store on Main St. that was very welcoming and always freezing cold on hot summer days (tolerated me and my sis even when we didn't have any money to spend)! The Com. Center with the old playground/its almost antique equip. and the "new" playground by the school, the always open old laundromat w/soda machine, the "Hitchin Post" and the exciting sound of the train as it chugged through town late at night! Such wonderful memories! Thank for sharing and thus - reminding!

P.S. My Dad always drove from Tulsa - to Welch, Okla. via Route 66, he didn't much care for the new Turnpike (Will Rogers Memorial, I think) except when he wanted to stop at the cool diner that crossed over it for a piece of hot apple pie! He loved the excitement of Route 66! Oh, the memories you have evoked! :-) Thanks again!

Dear Anonymous,
I often go back to this page and read your sweet comment about Bill Patch. It never fails to move me. I still greatly appreciate hearing such lovely words about someone that meant the world to me.
JD

Dearest Janine...I've been told the property with the large magnificent home across from Roy Clarks place on Hwy 10 outside of Welch was Bill and your place at one time. If correct...BEAUTIFUL! A wonderful man as Bill will live forever in your memories.PLEASE smile and remember that.It seems like such a lonely place when our HEART is gone...my sympathy and understanding is with you. God Bless

Thank you so very much for your kind post. The house across the road from Roy & Barbara's was ours. Many happy years and memories. Life was good. Happy memories are such a gift. I hope you enjoyed your travels. I enjoyed reading about them. You're a good writer! God Bless You.
JD

Chetopa is the Catfish Capital of THE WORLD, and the Pecan Capital of Kansas. I grew up there, but haven't lived there for over 30 years. I never recall catfish sandwiches being served at any restaurant. Instead, the reference is to a Catfish "Derby" fishing contest which is a big 4th of July event - the largest officially weighed in catfish caught that season received and award, prize packages, etc. As a kid, seeing the size of those catfish, I would never even dip a toe in that river! Also, spoonbill, which have a 'run' like salmon are 'snagged' in Chetopa, with large rods and hooks which resemble deep sea fishing poles.

The pecan groves are east of the river - outside of town - guessing that's not an area of town you were in. Kansas State University has their pecan extension field/branch on that side of town. Compared to any grocery store pecans, they are delicious. I admit I am a pecan snob.

Current day restaurants in town are on the west side - near the west edge of town as you are leaving. One is the Hornets Nest, a Tastee Freeze type restaurant. Another is the Shorthorn, a former bar that serves great chicken fingers. It's west of a pretty old vintage Sinclair station. There's also a gentlemen who smokes some great barbeque at The Firepit. Don't know the hours - but I do know people who drive from a fair radius around to eat there. It's tasty - they're on Facebook.

Janine, I remember your husband. In high school I worked for a vendor of the coal company; I recall how generous he was, and the events he held in/for Welch. I saw Mr. Cash when he was in town. I moved to Tulsa and went to college/lived there, and had the honor of meeting Mr. Clark multiple times. What a a talented musician - an amazing guitarist, and a sweet man. His passing last year was a loss for Tulsa.

Hope this is helpful - have a great day, everybody. Stay safe out there - and keep road trippin'! :-)