A little Afton Station -- A lot of other stuff

I drove to Afton this morning, just to check up on things. I stopped at Clanton's for breakfast and to read the newspaper. Over my veggie omelet I found an interesting article in the Tulsa World which I'll talk about later. Don't let me forget....

Nobody was at Afton Station when I arrived at about 9 a.m., but David and Marly have been working there almost every day, and I was eager to see how many visitors they'd had. In a phone call with David yesterday he said "a few", but I wanted an accurate count. Looks like in the week and a half that I wasn't there, they had about a dozen visitors. Not bad, particularly since it's winter and they tend not to put out the OPEN signs when they're working in the back. The guest book showed visitors from Arkansas, Missouri, and Oklahoma. There were also about $60 in sales recorded. Best of all, the place looked clean and well-kept. I stayed for about an hour and then, since nothing was happening, I allowed the old wanderlust to take over and got behind the wheel and cruised!
I backtracked to Vinita (where I'd had breakfast earlier), then took Route 69S toward Adair. In Adair, I took note of a familiar Route 66 sight. But wait! This isn't Route 66 and this definitely isn't Arizona. What are Twin Arrows doing here? A pretty fair imitation of the iconic Twin Arrows in Arizona rose in front of a meat store/Indian store/tourist trap whose advertising also employed the time-honored signs lined up along the road, a la Burma Shave and Stuckey's. I loved it. I loved it for it's tacky tourist ambiance on the exterior. Then I went inside and loved it even more. A line of frozen food cases containing every sort of game and other exotic meats imaginable! A long shelf of interesting Amish jams and jellies! Sorghum! Bee products! Indian blankets! And.... ta da!..... they had BUFFALO TONGUE! Tongue is one of my favorite foods, but I've only had beef tongue and lamb tongue before. Now I own one frozen buffalo tongue, and I can't wait to try it. Maybe next week. The buffalo are raised at the owner's own Windsong Buffalo Ranch nearby. 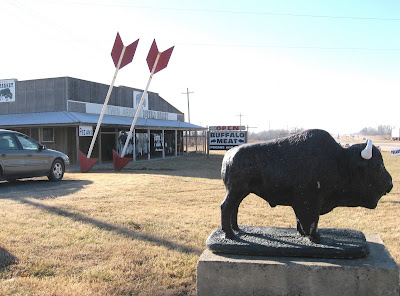 Here are the "original" Twin Arrows in Arizona. Unfortunately, they're in very bad repair now. 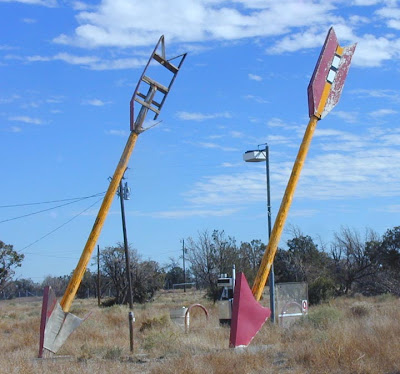 From Adair I drove through Pryor (a larger town, home of Country Fever and Rocklahoma, two of the nation's largest summer outdoor music festivals) and on across the bridge over Lake Hudson to Salina. I'd never been to Salina and frankly had never even heard of it, but I was enchanted at first sight. Salina looks like an old western town -- because it IS, not because some antiquey-minded people decided to make it look that way. It's not prosperous, and there aren't a lot of retail places. The storefronts are either empty or hold farm stores, auto parts stores, and the like. Here's the old hotel, which seems to be a well-kept B&B right now. Since the town is directly on the small lake, I'm sure the B&B does well. 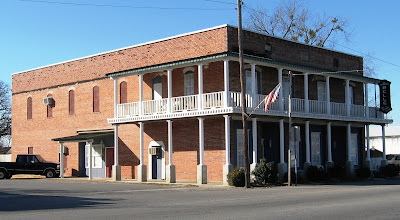 From there, I headed back through Adair and then to Route 28A toward Foyil. I took a little 2-mile detour to check out the Blue Coyote Winery belonging to the daughter of one of my dialysis nurses. I knew it was closed but I wanted to see what it looked like. It's way out in the boonies, but the tasting room looks like a place I'd like to visit this summer when it's open. Since I was on the road anyway, I stopped briefly to snap a picture of Ed Galloway's Totem Pole Park. I've been there many times and it's not one of my favorite Route 66 sites (considered so, although it's 4 miles off Route 66), but knowing that some folks who read this blog have never seen it, I felt it my duty to visit again. As usual, I was the only person there. 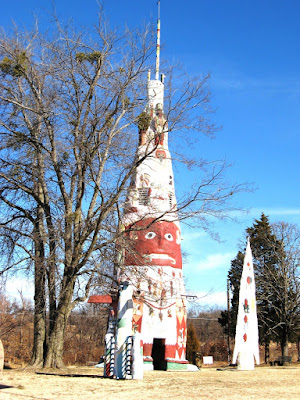 You can read about Ed Galloway's project here. http://www.roadsideamerica.com/story/9058. I have a certain respect for the passion that made the man devote so much of his life to making the world's largest concrete totem pole, but he was also a spectacular woodworker, and I wish there were more examples of that talent at his park. The small concrete building that houses some of his woodcraft projects, particularly a large number of violins, was closed today.

Back to Claremore, then another short detour north on Route 88 to something I recall seeing on another trip a few weeks ago. As long as this was a Twin Arrows day, I wanted to photograph another set of arrows. They're at the Twin Arrows Trailer Park near Oogalah Lake. They're not in great shape, but here they are. 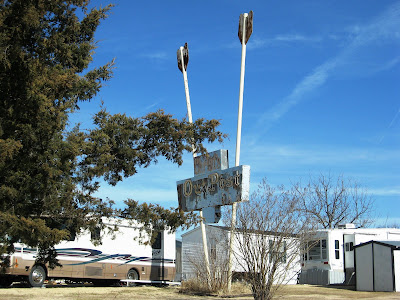 Now, about that newspaper article I mentioned before.... Remember what I told you about Picher, OK and it's problems with lead contamination and tornadoes? http://aftonstationblog-laurel.blogspot.com/2009/01/sadness-at-tar-creek.html.Well, a front page article in the Tulsa World today indicates this bizarre turn of events: As quickly as the remaining residents are being removed from Picher and relocated, their homes are being occupied by other families with children within the age of highest danger from the contamination. And the interesting part (although I guess not unexpected, considering....) is that our government is paying for both! Huh? Just read all about it here: http://tinyurl.com/d99zw7.
Posted by Laurel at 1:39 PM

Love the mini-arrows you found! I didn't know the original Twin Arrows sign was in such bad shape. But as you've probably guessed, I love seeing signs no matter what shape they're in!

I'm off to read the article now.

I just read it and had to comment. Good grief! Isn't there an alternative to housing for these folks? Why put them on obviously dangerous ground?

Can you contact your Congressman or Senator about this? It seems to be a ridiculous situation, and I would think there would have to be alternatives. If the site is dangerous, it should be closed to inhabitants!

I just discovered your site and really like. You've captured the once lost spirit of ol' 66! I live with blocks of Route 66 in Pasadena, CA and have posted a few photos. Go to my site and type in key word "route 66."

I'll be following you. Have a great weekend!