Today broke records for winter visitors at Afton Station! Eleven people braved the COLD day to come for a visit, and I was thrilled. Marly came as soon as I got there and stayed all day. I had expected such a dull day that I took some crossword puzzles, a book, the newspaper, and a few cleaning products in anticipation of the need to fill some time alone. That didn't happen. I didn't even have time to eat lunch. A truck driver and his young grandson were the first ones in the door, deciding to come in and have a look at the cars on their way from Eastern OK to their home in Paris, TX. (Remember that movie?) They were hauling a load of plastic pellets in one of the biggest and shiniest tanker trucks I've ever seen. Truckers are always happy to know they can park their big rigs just about anywhere in Afton without getting into trouble.

Three folks from Miami came in shortly thereafter. Two of the guys are model train enthusiasts, and one of them has a G-gauge train in his front yard! He invited me to drive up and see it some day, and I believe I will. I love model trains.
A family of six from Webb City, MO stopped by on a sunny day drive. By the time they arrived, the Station had warmed up pretty well, but the car showroom area was still extremely chilly since I'm trying to save money by not turning up the heat in there when there are no visitors. Little did I know we'd have plenty of people wanting to see the cars today. The dad of this brood had owned a couple of Packards in the past and was mourning the fact that he'd sold them a few years ago.
We also had three cars stop in front of the Station, stare in the window, and then leave. That's always so disappointing. Didn't they like what they saw? Did we look like we were closed? (No, all of our OPEN flags were out, the lights on, and we waved them in.) Did we scare them off? We'll never know, I guess.
______________________________
The following picture is from this morning's Tulsa World. For those of you who are following my Tar Creek/Picher site -- here are some kids playing on a bridge over the contaminated area! This is getting more and more sad and ridiculous. Today's article, which goes a little more in depth about the problem and interviews some of the parents who have agreed to move their kids back to the site, can be seen at: http://www.tulsaworld.com/news/article.aspx?subjectid=11&articleid=20090124_11_A1_Darian150820. It's all just unbelievable. 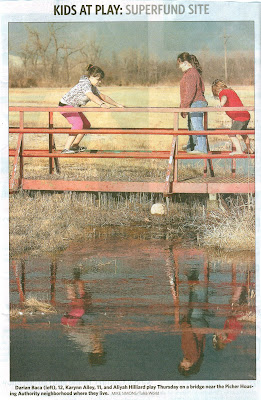 I'm picking up Ron M. at the airport tonight after his 2 weeks in Southern California and a cruise to the Mexican Riviera. I hope he has a coat with him, because he's going to have a big shock when he walks out of the airport into our 20-degree air.
Posted by Laurel at 5:07 PM

Glad you had such a great day :o)

Congrats on a busy day at Afton, at least for this time of year!

I read the article...no threat if the kids properly wash their hands, huh?

Is the guy freakin' kidding?! Shameful.