The Afton of Old

The ice storm hasn't arrived here yet, and the weather pundits are backing off just a little on their dire predictions, but I still figure I'll be home for the next day or two. Although the likelihood of power failures or tree damage is lessening, we will probably still have bad driving conditions. So, this seems like a good time to go through some of my postcard collection and put it in order. I have many old Afton postcards, so I thought I'd post a few so everyone can see what my little town looked like in it's heyday.

Both of these images are dated 1916. The roads were still dirt at that time. The first picture shows 1st Street, which is old Route 66 and is where Afton Station is located. As best I can figure, this picture would have been taken looking east, and the place where Afton Station now stands would be on the right and pretty far up the street. The second picture shows a large gathering (a celebration or a parade, perhaps?) in front of Livingston's Department Store and Culley Mercantile Co. on Main Street, which crosses 1st St. The Little Store Millinery can also be seen. None of those enterprises survived. The people in the picture are dressed in their Sunday best, and it appears to be summer. 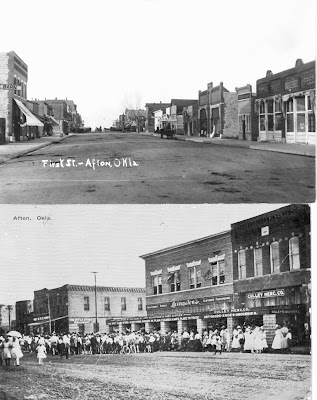 Now, here's one of my favorites. It shows Larue Olson and his buffalo, Pat ("The World's Only Trained Buffalo"), in front of Buffalo Ranch where they put on daily shows. I now own the billboard in the picture, and it's one of my prized possessions. It's a two-sided sign, and I loaned one side to the Route 66 Harley Museum in Tulsa. The other side hangs in Afton Station. 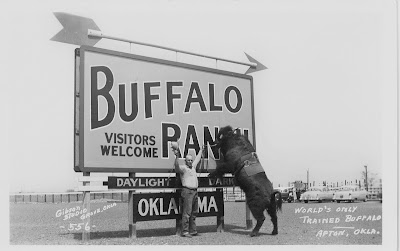 The trained buffalo eventually killed Larue, which probably didn't come as a shock to many people, since Olson always said you could train a buffalo but never tame it. My dear friend Betty Wheatley ran Dairy Ranch at Buffalo Ranch for 40+ years, and is a wealth of information and great stories about the tourist stop, one of the most famous on Route 66.

I have a lot more postcards that I could show here, but I'll save them for other icy days in the future.

Those are great, Laurel! I find it interesting to see towns as they were decades ago. It's amazing how parts of a city can be so dynamic and then just sort of dry up. That's what has happened with the West side of our town--it used to be THE place to be, at the turn of the century when Studebaker was such a big deal.

I'm glad the storm won't be as bad as predicted. I hope you're okay with staying home for a couple of days!

Classic shots! We have buffalo here on Catalina Island (26 miles from our coast). I wouldn't even attempt to try and train one of those guys.