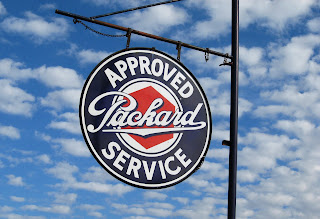 It was 77 degrees when I left Afton Station yesterday and 23 degrees when I arrived this morning. Oklahoma is just plain weird! Nevertheless, despite arriving 1/2 hour early under gray skies and bone-chilling strong winds, there were people at the door waiting for me to open. Go figure! They turned out to be a couple of hardy Iowans, and they got my jealousy juices going by describing the trip ahead of them -- slow wanderings on Route 66 to El Reno, then south through Texas and beyond for the next few weeks. As I sat shivering, waiting for the Station to warm up, that lazy-paced trip sounded mighty inviting to me. The couple chatted with me a bit, bought some maps, and had some fun with the Penny Pincher before moving on down the Mother Road.

I spent the rest of the morning getting Afton Station somewhat organized. I threw away an entire trash can full of stuff (where does it all come from?) and assessed what needs to be reordered, reprinted, and rearranged. After that, I settled in with the Sunday crossword.

But not for long. A few minutes later, Dean "Crazy Legs" Walker from Baxter Springs, KS appeared at the door. Dean is a Route 66 legend who became so because of his ability to turn his feet completely around 180 degrees. He's one of the well-known Route 66 "characters". A couple of years ago he made an appearance on The Tonight Show with Jay Leno in one of Jay's bits featuring people who do weird things with their bodies. Dean was also the inspiration for the Tow Mater character in "Cars". He and his wife stayed a while while we did the requisite Route 66 gossiping, then they headed off to a Tulsa casino for the afternoon. 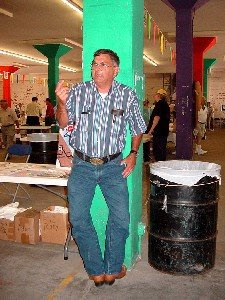 I didn't think to take a picture of Dean today, so I captured this one from another Route 66 site.

Then, back to the crossword puzzle. The sun came out, so I got my hopes up for more visitors. However, two crosswords, two Cryptoquotes, and one Sudoku later, I still had no more visitors. The Station never really warmed up enough, and sitting there shivering isn't my idea of an ideal afternoon, so I considered going home.

I miss having Betty with me there! She's been sick and unable to come down for a visit. Furthermore, Ron M. is leaving this week for two weeks in sunny California and Tattoo Man is about to have surgery that will keep him away for a while. I predict the next two weeks will be pretty lonely at the Station.

At 2:00 I closed up and headed for home. I went around back to check that everything was ok back there and snapped this picture of one side of the yard. We're not proud of our back yard, but we needed a place for our 5 parts cars and David's collection of trailers. He's also built several buildings back there for the better cars. Actually, in a town like Afton, a few dead cars strewn around is more the rule than the exception. 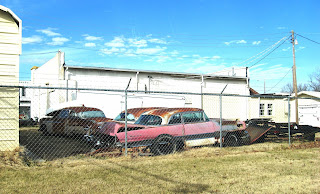 I LIKE your backyard, Laurel. That's one thing I love about Oklahoma is that small towns here are full of interesting old cars just waiting for a restorer to perform mouth-to-carberator resucitation on them.