I'm posting two entries today. This one is about MOST of the little Route 66 trip I took yesterday. One very important part is left out, because I think it deserves more than just a mention. So, after this entry, you'll find another one which I think is important. Please read it!
Yesterday, I drove to Afton Station early, expecting just to meet briefly with David and be on my way. I didn't put out the "Open" flags or signs, and turned on a minimum of lights. Nevertheless, moments after I arrived, I had a visitor. A truck driver from St. Louis stopped by to say hello and give us some vintage Packard parts he happened to have. How nice of him! He stayed for about a half hour until David arrived. Meanwhile, much to my astonishment, more visitors arrived! A couple from Ponca City, OK, doing a partial Route 66 trip, found Afton Station via the very comprehensive Route 66 guide published by the State this year. (Frankly, I think they thought they were at Daryl Starbird's Custom Car Museum at first, but once they figured out we were something different, the gentleman enjoyed a tour of our much smaller and less impressive car museum. LOL!) David arrived about the same time that Marly arrived. I haven't seen Marly since before Christmas, so it was nice to hear about his holiday. He's going to wax my Chrysler 300 tomorrow. Yippee!
Leaving Afton, I drove straight to Miami, where I had a most pleasant visit with Betty, who has been ill. Her house is amazing, and her incredible collections made me feel as if I was touring a museum. It took me an hour just to ooh and aah over all of her collections. She even has an entire room devoted to Buffalo Ranch!
Leaving there, I headed down Route 66 in Miami, and since I was getting hungry, I stopped at the iconic Waylan's KuKu Burger for an order of fried yellow squash. The KuKu is the last survivor of a once-widespread chain of fast food places. 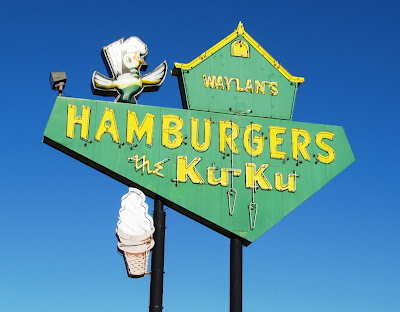 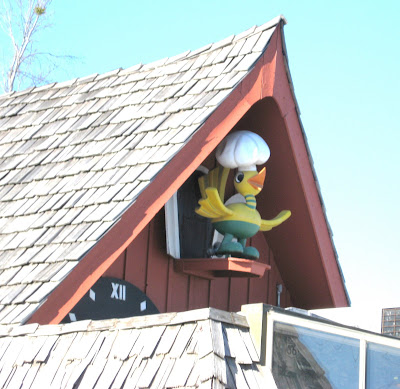 After my tummy fill-up I drove through Commerce, still fully intending to make it to Joplin. But in Commerce, I just had to veer a few blocks off Route 66 and take a look at Allen's Filling Station, recently opened as a Route 66 tourist stop and gift shop. It's an old Conoco station built into the side of another building, which makes it quite unique. It wasn't open, but I took a picture. 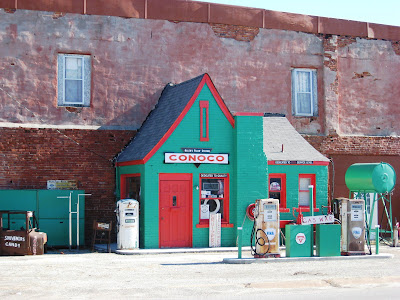 And, as long as I was in Commerce, I also just had to drive a couple of more blocks to a site I've visited numerous times in the past.... Mickey Mantle's boyhood home. I'm a huge Yankee fan, and so are many of the friends who come to visit me, so I always make it a stop on my tour. It sits in a very modest neighborhood and, frankly, isn't that well taken care of. Here's the house, the barn that young Mickey used as a target for batting practice, and the sign that explains both. Never open to the public, it's just a drive-by. 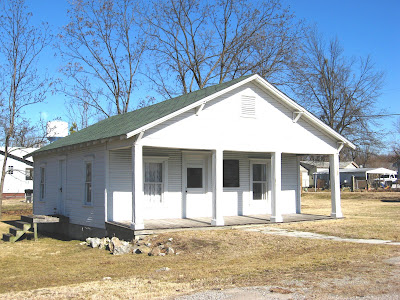 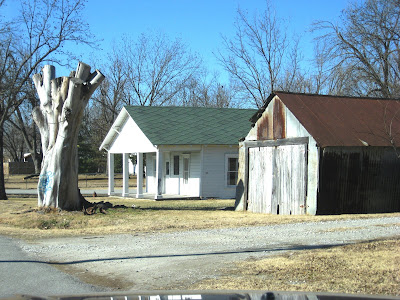 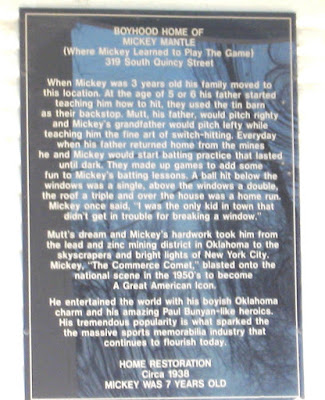 (What I did at this point is the subject of the next entry.)

I made it as far as Baxter Springs, Kansas before I realized I needed to turn around in order to be back at David's house by 3 p.m. I said I'd stop because I had a Christmas gift for his son. So, I spent a few moments in Baxter Springs, long enough to take pictures of the old Phillips Station that is now open as a museum by my friend Carolyn Pendleton, and a stone mural on the side of the bank that I like because it includes a prominent Route 66 shield. 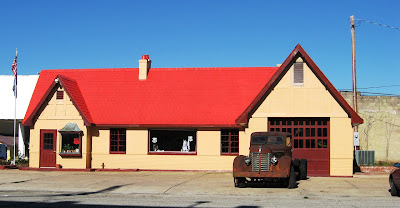 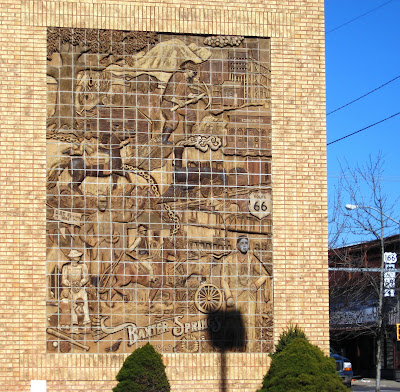 After that, it was back to David's, and then the long drive home to Tulsa. For many reasons, I'm glad I took the time to make this journey. Of ccurse, any time spent on Route 66 is fine with me!
Posted by Laurel at 3:47 PM

What a shame that they do not maintain the Mantle homestead. Glad you had a good day today :o)

Mantle's house sure is not much to look at. I've never seen it. Thanks for the photo.