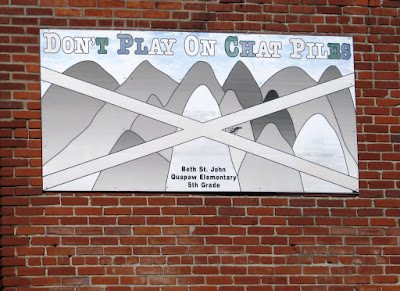 When I left home yesterday, my idea of how my day would go turned out to be entirely different from how it actually played out. I had intended to drive up to Afton Station for a brief meeting with David, then drive to Miami to visit Betty at her home, then proceed from there to Joplin, Missouri to do a bit of shopping. I never got to Joplin, but I did have a most interesting day. In some ways it was nostalgic, since I explored this territory in depth during the two years I lived up that way, but I don't go up there much any more.

I'll tell you about the rest of my day later, but for now I feel a need to concentrate on the place that touches my heart possibly more than anywhere I've ever visited. The government calls it the Tar Creek Superfund Site, but to the folks who live ( or lived) there, it's Picher, Oklahoma... their home. I hadn't planned on going to Picher yesterday since, every time I visit there, it tends to throw me into a depression that can last for days. However, a roadblock as the result of a traffic accident diverted me there, and once I'm there, it's very hard for me to leave.

I lifted the following from Wikipedia. There are hundreds of other references to the Tar Creek Superfund site and Picher, but this one is a concise overview. I urge you to read it!

Picher has become notable for its location near the United States Environmental Protection Agency's Tar Creek Superfund site, which had a long history of underground lead and zinc mining until around 1970. Chat piles left behind by the mining companies contain lead dust that has blown around the town. Elevated lead levels in Picher children have led to learning disabilities and other problems. The lead and zinc have also seeped into groundwater, ponds, and lakes, many of which still are used by children for swimming. Since the children of Picher have been found to have elevated levels of lead in their bodies, the EPA has since declared Picher to be one of the most toxic areas in the United States.
Currently the future of site is a controversial political issue. U.S. Senator Jim Inhofe (R-OK), who formerly supported cleaning up the site with a $45 million cleanup plan, to be executed by the EPA, the Department of the Interior, and two of the responsible mining companies, now supports a buyout of the town.
U.S. Representative Brad Carson (D-OK), supports buying out the families at the center of the site and moving them to a safer location. The Oklahoma Legislature has earmarked $3 million to move families that have children under 6 years of age.
Other areas affected by Tar Creek mining include Cardin, Miami, North Miami and Quapaw.

The people of Picher have been patient for many years, while our government tries to figure out what to do about the ENORMOUS piles of lead and zinc filings that dominate the landscape and poison their children. They watched Picher go from a thriving mining town to a poverty-stricken wasteland. AND THEN..... just as things were coming together and property owners were anticipating a buyout so they could move to safer ground, a tornado struck Picher in May of 2008, killing six and wiping out more than half of what was left of the town. Haven't those poor folks suffered enough?

In the helicopter photo below, you can see the blocks and blocks of homes wiped out by the tornado. The "piles" you see in the photo are just a mere fraction (very mere!) of the gigantic chat piles that have been sitting there and polluting for decades. 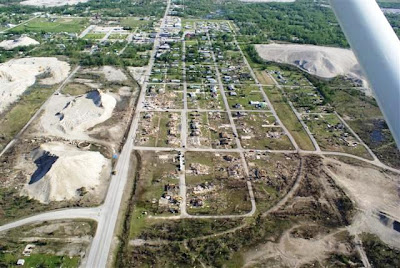 I took quite a few pictures of the Picher area yesterday. It's hard to capture the enormity of the mountains of chat that one drives through, encompassing several square miles. Here are a few I took.

In some places, there's the incongruity of what looks like mountains towering over sand dunes. Both the "mountain" and the "dune" are chat. 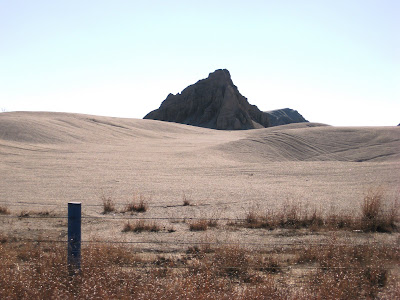 Because of the erosion of the pile, from a distance this one has a "Mount Rushmore" appearance 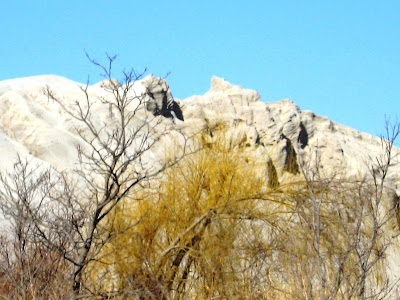 A view from the road through Picher. 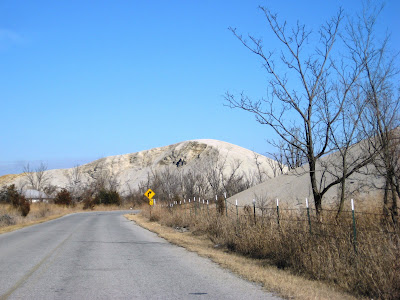 The few homes left after the tornado devastated the town are unoccupied. You can see what was once their view of one of the chat piles. 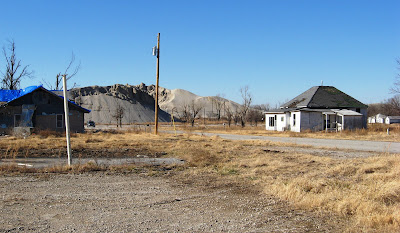 A few people are coping as best they can. 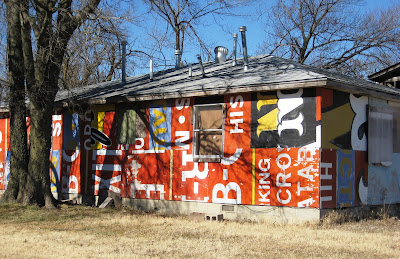 Since I was there last, some of the remains of tornado-ravaged homes have been removed. It's my understanding that the school has closed because there were only a few children left in Picher. When I was there yesterday, I didn't see anyone whatsoever, although I didn't go into the few blocks of the town that were not hit by the tornado (at the very top of the aerial view).

Be thankful, folks, for your warm homes and safe families. And now that I've given you a little glimpse of the source of my sadness, I'll start a new entry to tell you about the rest of my day trip.

What a sad story. What was the name of the town in Missouri that was completely closed due to toxicity? It escapes me at the moment, but it sounds like a similar story to Picher.

Times Beach, evacuated because of dioxin.