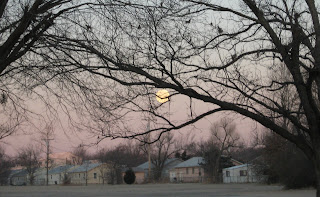 My uncontrollable wanderlust has such a tight grip on me that it tried to pull the steering wheel out of my hands today. Maybe it was just the full moon. Case in point: I love Afton Station and I'm fulfilling a dream by owning it. Everyone knows that. But so many days -- today being the worst of them -- the need to just keep driving is overpowering. Although as I write this (to transpose to the computer later), I just arrived at the Station and I'm still not sure I'm going to stay. The road is calling so loudly that it hurts my ears. What's wrong with me?
Just getting here this morning wasn't a straight shot on Route 66. I left home before sunrise so I could photograph what was supposed to be the largest full moon of the year. (It wasn't all that large -- at least not here). By the time the sun was peeking up, that mysterious magnetic force pulled me off onto a side road, heading toward Lake Oologah, although I didn't know that at the time. It was SO beautiful that I just kept going... and going... and going! I was the Energizer Bunny, and I couldn't be stopped. About 25 miles down the road, I came to my senses and turned around so as not to be late to Afton. Now, I'm here, but the Energizer Bunny is still running around in my head, saying Go, Go, GO! Later, I'll let you know if I succumbed to that wascally wabbit.
Here's Oologah Lake. 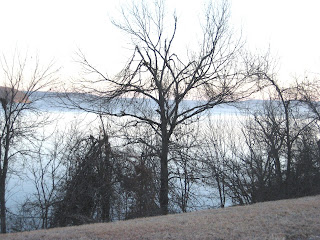 ____________________
Ok, I lasted until 1:30 p.m. with not a single visitor. So I left. Now I'm home and feeling guilty and irresponsible. But a lot of Route 66 tourist places close completely for the winter, and at least I'm giving it a try. Right? Help! Somebody agree with me!
My trip back to Tulsa took me to Nowata, a small town up north. To get there, one drives through magnificent ranch country..... nothing but cows for miles and miles and miles, and a vista that goes on forever. I passed through the very small town of Alluwe before hooking back to Route 66 in Chelsea. I guess I have that out of my system for a while now. 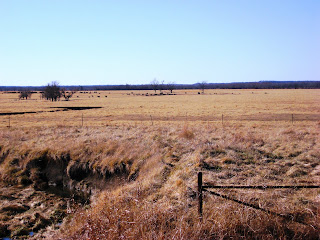 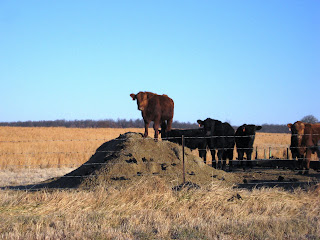 The much-photographed Country Court sign outside of Chelsea. The motel itself is now just a tangle of vines, weeds, and lumber. 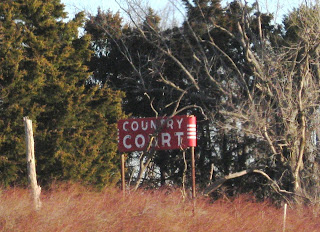 The beauty of owning your own business is to run it as you see fit, so stop feeling guilty and enjoy each and every day :o)

Love love love the Country Court sign! Can you get close enough to the motel to get a picture? I'm not asking you to do that, I'm asking because I want to do it!

Don't feel bad for cutting back on your hours at Afton. Just the other day, I noticed a place close to us that sells garden doohickies and stuff like that...their sign said that their winter hours were 12-4. This is not prime season for road trips on Route 66, so it's only natural that you would scale back your hours. Every visitor is a gem, but you also have to think about what works for you!

she has COWS !!!! i found out today i have SHEEP too ...
i live in a built up suburb - but just 5 mins down the road is a semi rural area ..hence my wonderful drive to work

and you are open more than many other businesses on the Route - don't beat yourself up about it. Maybe set shorter hours for the winter months ??

There's nothing wrong with you, well, except for your kidneys, and I'm praying about that for you.
But, on a nice, warm summer's afternoon I feel like just hitting the road and going noplace in particular, too.