You can just imagine my surprise when we were driving past the pecan company about 2 miles down Route 66 from Afton Station and glanced to the side to see a giant rocking chair!   Ok, it's not quite as big as the one at the Fanning Outpost, but it's BIG!   Ron M. was with me, but declined my wish for him to climb up on the chair so I could get some perspective on it's size.  (Frankly, I don't blame him!) 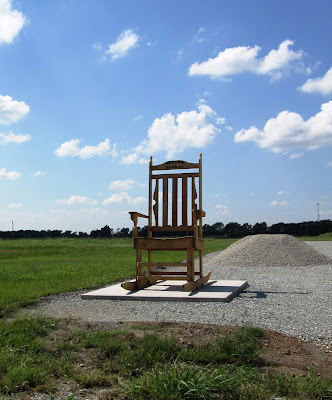 We had a visit from the Mayor of Afton today, a rare occurrence.  We had the chance to ask him some questions we've been  harboring for a while, such as where-oh-where are those "Welcome to Afton" signs that he ordered over 2  years ago.   He said that it's taken all this time to deal with state regulations but now all he needs is for the city maintenance crew to have time to do the deed.  We invited him to our Clean Up Day on Sept. 12 but he's not sure if he can come. 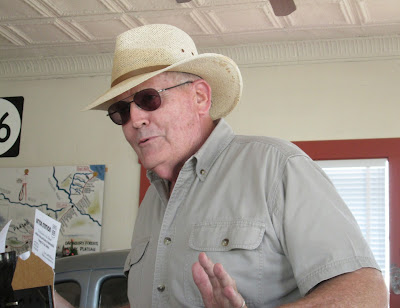 We had a busy morning followed by a rather quiet afternoon.  Our guests came from Hamilton OH, Spring Mill FL, Mesquite NV, Ogden UT, Tulsa OK, and Enid OK. 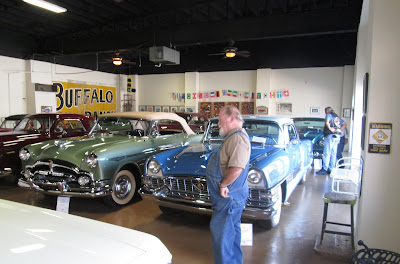 Some of our visitors examining the beautiful cars. 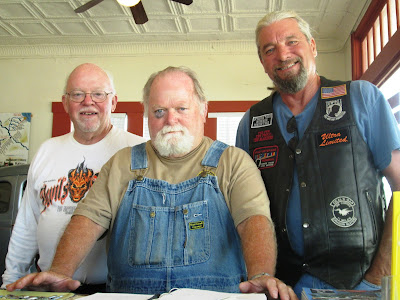 These guys, from Hamilton, Ohio and Spring Hill, Florida arrived on motorcycles.  They started out early enough that the could ride for quite a while before being hit with the intense heat that came later in the day. 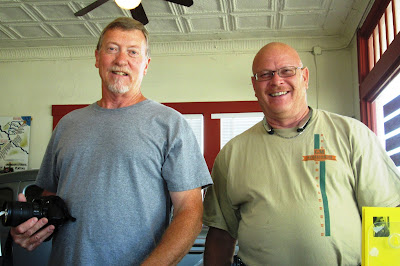 We were also visited by these two very personable fellows who are following Route 66 from their homes in Mesquite, Nevada and Ogden, Utah.  We really enjoyed their company and conversation.  Good thing they don't have a home arrival date cast in stone, because it took all of  yesterday for them just to go approximately 60 miles!   They're doing it right! 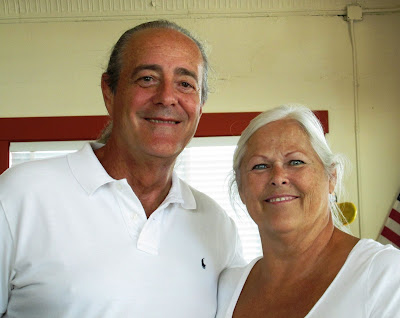 From closer to home came this couple from Tulsa.   They've "done" Route 66 to the west out of Tulsa and today they're going east.  He's originally from Albany, NY.  They're doing Route 66 in small increments, too.  Today, they planned to go from their home in Tulsa just as far as Miami but intend to see everything they can find along the way.

Check out this neat flyer that Ron M. designed to publicize the Clean Up Day!   Thank you, Ron!