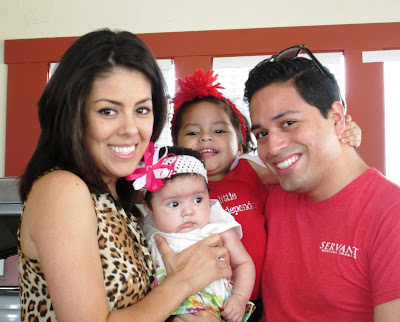 I can't resist a cute baby, so I was in Heaven when these two came in.  Little Evelyn just turned two and tiny Alyssa is a mere three months old.   Precious little girls.    They arrived at Afton Station with their mother Martha who was accompanying her friend Jose, whom we had been waiting to meet.  Jose is the Programs Director for our local Tulsa Equality Center and is seeking "props" for a big meeting they are having in a couple of weeks.  The theme is Route 66, so Jose had no problem at all choosing some items from the Station. 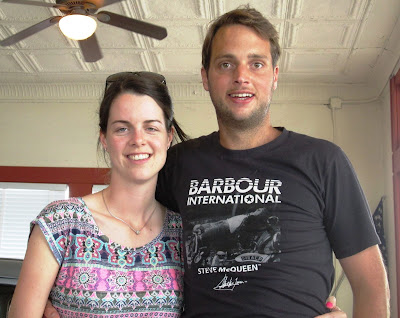 This young couple from Manchester, England is traversing Route 66.   This is their first trip to the United States.  It's exciting that they chose the Mother Road for their initiation to our country.  They will see how we live out here in the middle rather than just spending time in NY or LA and never seeing anything in between as many folks do..  I approve! 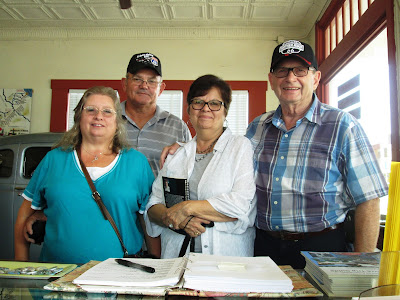 Two brothers and their wives from Evansville, Indiana took to the road two days ago with three weeks to make it to the end of 66 in Santa Monica, then making a quick turn around to get back east.  Sounds just about perfect to me1

Other visitors came from Richmond VA, LaCrosse WI, Houston TX, and Ketchum OK.  Things are slowing down now on Route 66, but there are still plenty of folks out there hoping to find enough shops and museums open to justify their trip.   For this reason, I fight to keep open as many days a week as possible.  I will have to alter that a bit in the next couple of weeks while we have personnel either on vacation or in need of medical attention.  We're doing our best to always be there for all the fine folks who are having the time of their lives on Route 66.   They generally say that the best part of their trip is meeting the people along  the way, so we want to be available to meet and be met.
Posted by Laurel at 5:52 PM