We were called and warned that the drive to Afton this morning might be a challenge, with heavy rain, heavy wind, and hail.  We lucked out, however, and our trip there was a bit soggy but uneventful.  Not so when we  got there, however.  For the first time, we had a minor a flood in the main room, not the car showrooms which are regularly drenched, but "my" room, with all the Route 66 paraphernalia.  This has never happened before, but David and Marly, who were there working in the work room, said that at the height of the storm the wind was blowing rain right through the window frames.  Yikes!  It wasn't terribly serious, but Ron M. had to drive to the nearest dollar store and purchase a pile of cheap towels for the clean up, then was his usual helpful self in sopping up the mess.   The back rooms could be cleaned  up with our new Shop Vac.

I was convinced that we wouldn't have a single guest all day, but again I was wrong.   We had 7 visitors after the skies had partially cleared and we were so glad we were there to greet them.   One was a man from Grove, OK on business. 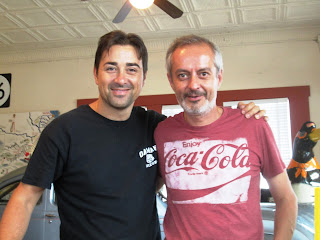 These two handsome guys were from Madrid, Spain. 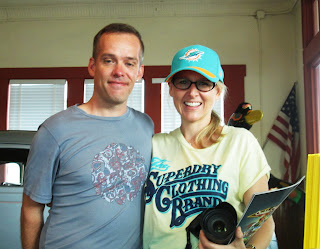 Following behind them was this couple from London, England 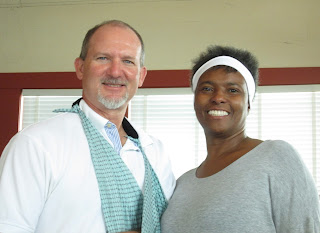 Then came this couple from Lexington, Kentucky.   They were taking a day off from a lake vacation, whereas the Spanish and British folks were in the midst of full Route 66 trips.  The weather didn't seem to phase any of them, and I'm glad of that.

Looks like we'll be open tomorrow as well as the entire weekend, so come on over and visit!
Posted by Laurel at 5:53 PM