Years ago, before I arrived in Tulsa, the town had a very popular and well-attended raft race on the Arkansas River every Labor Day.  Rafts had to be hand made and, preferably, have interesting themes.After 20 or more years, folks decided it was time to restore the tradition. 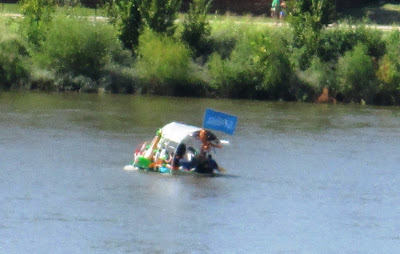 Ron M. and I wanted to see some of the race, but I was delayed by my dialysis treatment so we arrived late at the river.   All the good parking places were gone, but we found a spot on top of a hill overlooking the Cyrus Avery Bridge and Plaza.  It is the hill which will one day be house the Route 66 Alliance Interpretive Center.  We ended up seeing only one raft (out of the hundreds that were signed up to race), and the photo is from so far away that it's almost useless.   We did get a few photos of the bridges from our perch, however.


In the photo, the new bridge is on the left.  People lined the walkway on one side of the bridge.  The old Route 66 bridge, on the right, lay unused.   What a shame that severl years ago, the old Route 66 Avery Bridge was declared unsafe for both vehicles and pedestrians.  It would have been the perfect place from which to watch the race. 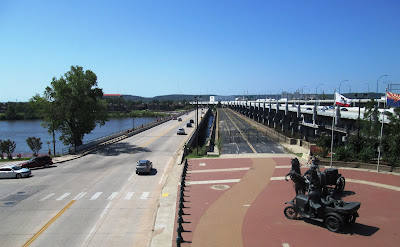 It appears that the race was very well attended.   I haven't seen so many people out and about in  Tulsa since I moved here..  The day was fine, a little hot but not unbearable, and the camradarie was evident everywhere.  If I can find some better photos of the event, I'll post them here later. 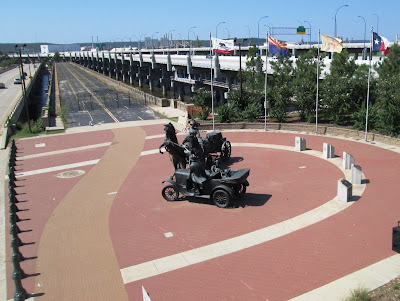