Should anyone suggest that Route 66 is a "dead" road,  a road no longer used or appreciated, I wish to submit a list of the origins of our visitors on this Sunday before Labor Day.

And from the U.S., they came from:
Oregon, Alabama, Iowa, Michigan, Georgia, Missouri, Texas, Arkansas, Indiana, California, and Oklahoma

There were 88 (or more!) visitors, which created an atmosphere of gleeful exhaustion as Ron M. and I scurried to give each and every traveler a hearty welcome, an invitation to check out the vintage car showrooms, a bottle of cold water if they appeared to be suffering from impending heat stroke (it was over 100 degrees today), and any directions they might need as they proceeded down Route 66 to their next destinations.  It was clearly a day that shouted "This is what  Route 66 is all about!" 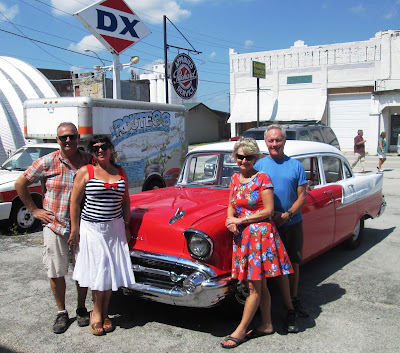 These two couples from Toronto, Canada rented this '57 Chevy for the trip.  Yes, rented!   They told us of a place out of North Carolina called blacktopcandys.com , which hires classic cars.  We had not heard of it before, but their website is full of useful information.  We've been saying for years that there would be a market for vintage car rentals.  Glad to know someone is doing it! 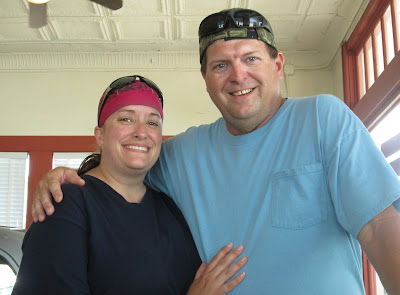 We had honeymooners!   This couple from Gravett, Arkansas were married less than 24 hours before they came to the Station.  Best wishes and a happy future to them! 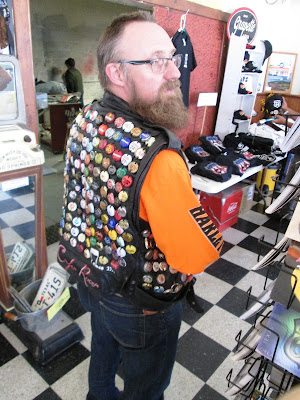 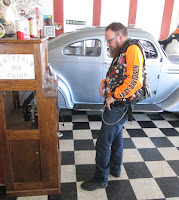 This guy from France wins our prize for "Most Beer Bottle Caps Sewn on a Leather Vest".   This was most impressive!    All are from beers from the France/Belgium/Switzerland region, he explained.   It must be an incredibly heavy thing to wear! 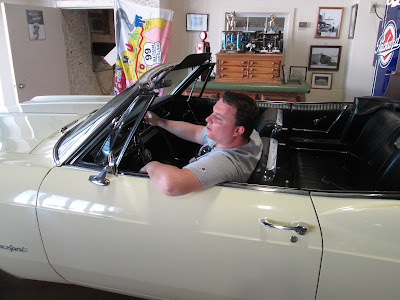 A group of 20 Swiss motorcycle riders were the first visitors of the morning.  This young man from the group was fascinated by the '65 Chevy, so we let him take a "ride". 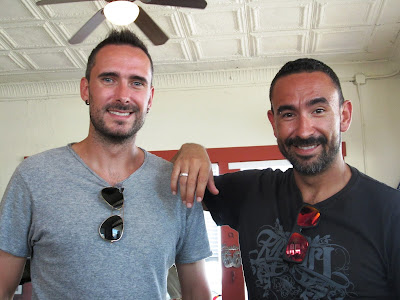 Two gentlemen from Madrid, Spain.  Spanish guys are always handsome, and these were no exception.  (One of the perks of this job...  ha ha) 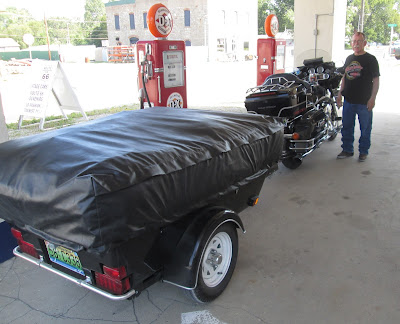 This trailer being pulled behind a hefty motorcycle becomes a pop-up tent for this couple from Birmingham, Alabama.  Very clever and according to the owners, relatively easy to pull down Route 66.   Cool! 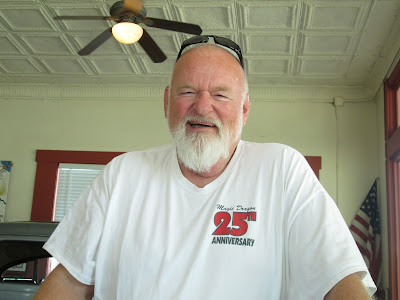 This gentleman from Dayton, Oregon had been here before and is very appreciative of what we do here.  We enjoyed a long conversation with him before the rest of the world came knocking at our door.

There's so much more I could talk about today, but I'm still recovering from yesterday.   On Tuesday we will be at the Station to greet Rodger Fox's "Ride for the Relay" that stops by every year.  We  hear that he has 130 people in his entourage this year.  They ride for various cancer related charities and have been doing so for 10  years.  We always appreciate their visit!