Route 66 and the Power Tour

With the Hot Rod Magazine Power Tour in town we didn't quite know what to expect today at Afton Station.  We knew that there were approximately 4,000 hot rods parked just 15 miles down the road at a casino in Miami, OK where they had all stayed for the night, and that they'd be leaving this morning for their next destination in Stillwater, OK.  We suspected (and this was verified later) that most of the cars would take the interstate to get there, although Ron M., Marly, Phil, and I arrived at the Station very early to catch as many as we could of those who chose to take old Route 66.  Marly had gone to the host casino last night to hand out Afton Station brochures in hopes of arousing some interest, but the place was so jammed with hot rods that he  was unable to get very close to the action.

As it turned out, we had far fewer visitors than we anticipated, but those we did have were the hearty types who were committed to taking the Mother Road and eschewing the evil Interstate.  Between yesterday, when Marly and Robin were holding down the fort, and today, we greeted approximately 85 visitors, although not all of them were from the Power Tour.  Most of those who came from the Power Tour were, interestingly enough, from Canada.  Once again, it appears that folks from other countries have more interest in and respect for Route 66 than our own countrymen.  The Canadians who visited with us today were all so excited about being on the Mother Road!

Several cars were already at the Station as Ron M. and I drove up.  This array of colorful custom cars are owned by the Ontario, Canada folks. 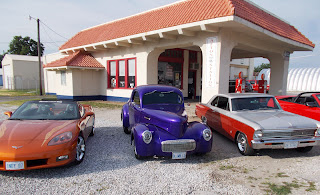 Their leader was the gentleman below, whose enthusiasm for Route 66 knew no bounds.  He simply didn't understand why so many of the Power Tour members chose to rush on the interstate to their next evening meeting place. We liked him and his attitude!! 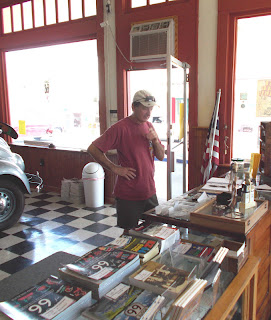 Another wave of cars from the Power Tour came shortly thereafter.  These folks were from a number of different states.  It always looks great when vintage cars line the streets of little Afton. 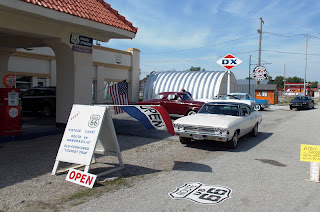 These folks from Chatham, IL were interesting to talk to because they had been very good friends of Bob Waldmire before he passed away two years ago.   The husband had known the Waldmire family since he was a small boy.  We enjoyed reminiscing about the wonderful Bob. 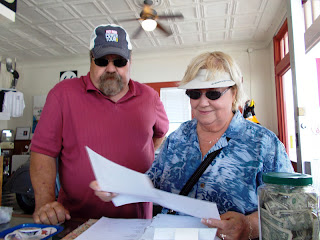 Toward the end of the day, this solo motorcycle rider drew our undivided attention.  He is from Oslo, Norway and has been riding Route 66 on his motor bike (which he ships here from home) since 1965!   He was very interesting to talk to because he remembered so much about the old Route 66, aspects that no longer exist.  Again, his love of the road, and of America, somehow seemed deeper than that which we observe from many Americans themselves. 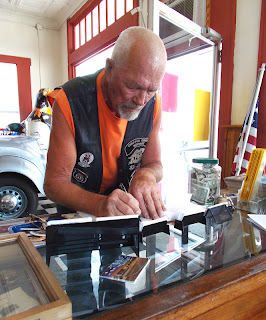 It was an extremely busy and interesting day.  Things are getting so busy that I can't guarantee a blog post for every day that I'm at Afton this upcoming weekend, but I'll try.  If not daily, I'll at least sum up the weekend next Monday. 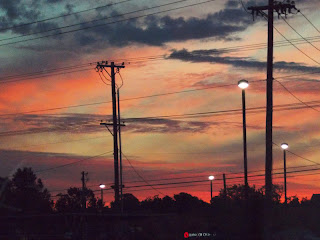 Nice sunrise today, but I was still in the city and plagued by overhead wires.  I guess it made a pretty interesting photo, though.
Posted by Laurel at 5:41 PM

Happy to hear you had such friendly and enthusiastic visitors from the Power Tour group stop at Afton Station. I hope they let the Interstate faction know what they missed.

I cannot believe that they would take the interstate instead of the Mother Road. We have been upset any time we have had to get onto I-40.