Forgive Me If I Nod Off

These busy weekends make me so tired!   I'm so energized during the time I'm at Afton Station meeting all the interesting people that I threaten to crash as soon as I get home.   But certain things must be done.  My first act upon arriving home is reading my email.  And then, right after that I review my photos and write my daily blog post.   This is not my best work, I assure you.  Sometimes I see errors upon reading a post many days later.  So I ask  your forgiveness and that you remember that I'm often writing at my lowest point of the day.  Today is such a day.

It was another very busy, very exciting day at the Station.   Ron M. was with me, Tattoo sat in for a few hours, and Phil and Robin were busy mowing and trimming the property all around the Station.  I seriously don't know what I'd do without my helpers during this busy time.

Our first visitors upon arrival were these two jolly guys from Queensland, Australia.  They exemplified the Aussie reputation for being happy, optimistic, talkative, and fun.  When I asked a couple of questions about their land, Peter (BTW, they're both named Peter!) drew me a little map of the country and pointed out where they live.  They also recommended Tasmania as an amazingly beautiful place to vacation.  Hmm....sounds good to me!   Here they are, posing with their souvenir Afton Station toilet paper. 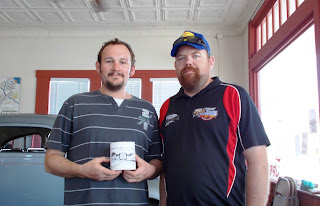 A pretty lady came in asking if we sold coffee.  We told  her we don't, but she was welcome to have a free cup of our arguably excellent brew.  She stayed for quite a while, during which time we had a great chat and found out that she is Becky Hobbs from Nashville, TN, a recording artist and producer of several movies and videos.  She gave us copies of her two CDs, and the one we played on the spot, containing song tributes to her native Cherokee heritage, was beautiful.  Since the photo I took of her turned out to be a blur, Ron M. took a picture of the autographed one she gave us.  I'll have more about her tomorrow after I check out her website. 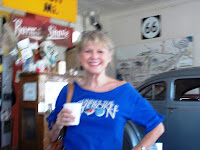 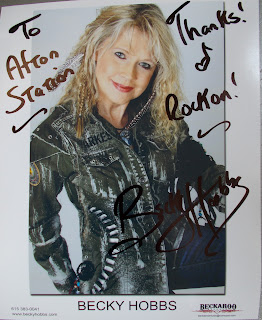 Our other visitors came from Wolfe City TX, Marseilles France, Phelan CA, Wisner LA, St. Louis MO, four more from Queensland Australia, and Tulsa, Centrallia, and Vinita OK.   There were 27 visitors in all.  For much of the afternoon, our photographer friend Michael Scruggs was taking photos, both inside and out, to be used for postcards in the future.  He produced some beautiful shots, which I will be presenting here in the next few days.    But for now, I'm ready to shut down this computer, have a bite to eat, and settle in front of the TV to watch (if I can stay awake) the OKC Thunder kick the hell out of the Miami Heat. 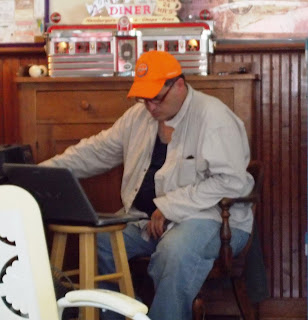 Becky Hobbs. There's a name I have not heard in a while (don't worry Becky...I don't get out much). I remember "Becky Hobbs and The Heartthrobs" from the early '90s.

You get such interesting people through those doors, Laurel.