Today, four Luxembourgers on motorcycles came for a visit.  It was a hot day and they were all decked out in their leathers, but I think they were having a great time nevertheless.  They're heading west to California.  Ron M. caught photos of them coming and going. 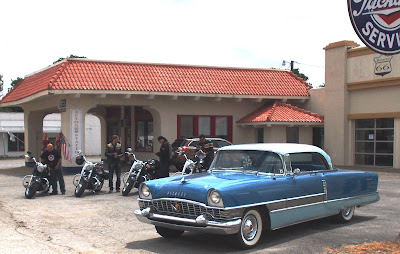 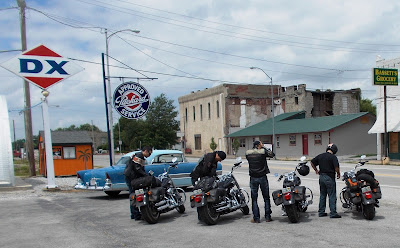 This was the first quiet day we've had at Afton Station for about a month.   That's both a blessing and a curse.   Although we love to pack the place with travelers, we also know how to make the most of a lazy day.   Today, we decided to have a pizza party.   Phil and Marly went to fetch the pizza while Ron M., Marly's mom Judy, Robin,  Marly's wife Sue and I wait patiently for them to bring back the goods. 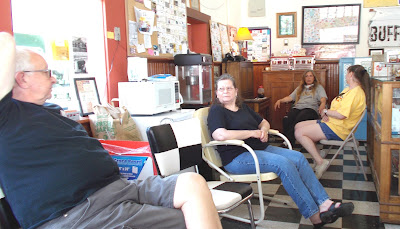 I've got to say that the pizzas they obtained at the little convenience store just 2 blocks from Afton Station were by far the best I've had in Oklahoma.  Amazing!   They cook them fresh there, on cracker-thin crust... just the way I like it.  Of course, perhaps the fact that it's the first pizza I've eaten since going on dialysis might have something to do with my appreciation of it.   (Tomato is forbidden to kidney patients, but I can cheat occasionally, and today was occasionally.)

Our other visitors came from Troy WI, Claremore OK, McAllen TX,  Glenwood MN, and Grove, OK.   As we were closing up and getting in the car to go home, Tattoo Man pulled up, fresh from getting yet another tattoo, his 112th.

Finally, here's a picture taken by Phil on Friday when I wasn't at the Station.  You can see that signatures on the door are starting to multiply.   Today, there's barely any room left on the door, except at the very bottom.  I guess we'll have to get some new doors soon!   (I don't know where these fellows are from, but it appears to be a father and son, and they look pleased.) 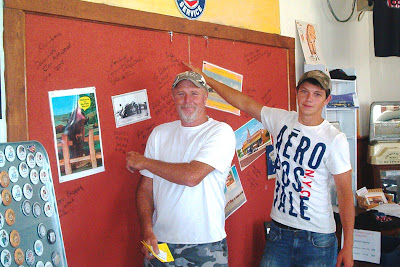 You need a globe to keep track of all of the countries from where you get visitors! An obscure island north of Sweden, Luxemborg, Korea, Japan,....

Trevor,
Actually we HAVE had visitors from Antarctica! I haven't made a recent count of countries, but I'm guessing we've visited with folks from about 30 or 40. Cool! Route 66 is definitely internationally popular.