There was such good news as Ron M. and I drove out of Tulsa toward Afton early this morning.  On 11th St. at Mingo Rd., this brand new Route 66 sign has been erected, guiding visitors to both alignments as well as  the "Interpretive Plaza".  So, we detoured down a half block to the place where Mingo ends at a very large open green space and met the contractor who is building the interpretive plaza.  It won't be a building per se, just a series of informative kiosks which will tell the story of Route 66 to those entering from the east, just as the similar interpretive plaza does at the Cyrus Avery Bridge for western entering folks.   The contractor is wildly enthusiastic and says it should be finished within days.  It's such a great site.  I can just picture myself sitting on that wall on a lovely spring day like today.  Pictures will follow, perhaps tomorrow. 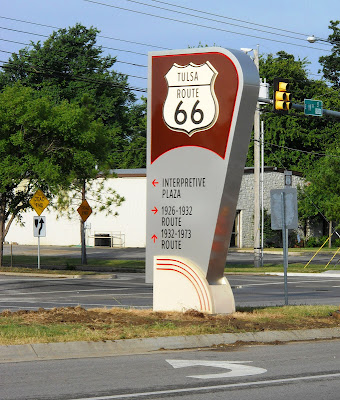 It was a pretty great day at Afton Station today, too.  Among the 26 visitors was this group of bikers from Robinson and Palestine, IL . . . 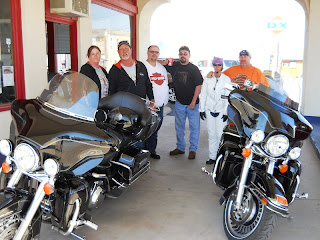 . . . and this very cute and very happy honeymoon couple from Pittsburgh, PA.  They're doing the entire Route 66 and fulfilling a years-long dream of the husband.   They truly seemed blissfully happy with each other and with the Mother Road. 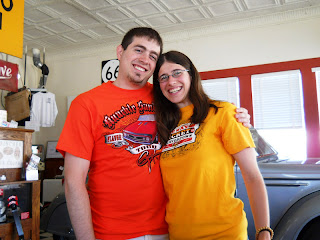 Other visitors came from far and near . . .Anna TX, Rock Hill SC, Carl Junction MO, Natagoches TX, Puget Sound WA, Chicago IL, Grand Rapids MI, and Miami, Broken Arrow, and Tulsa, OK.  It was one of those days when a great many people arrived as we were leaving.   Unfortunately, we were already quite late and had already closed up and activated the alarms when two really understanding men from Indiana  came by on motorcycles and we had to turn them away.  I hate it when that happens!!!!

Marly, Phil, and Robin all dropped in and so, surprisingly, did Tattoo Man.  His scheduled surgery has been postponed for a week, so instead of recuperating today, he got a reprieve for a little while.

There were tons of visitors yesterday when Phil and Robin were holding down the fort.  There were 36 visitors and among them folks from S. Africa, Denmark, Italy, and Switzerland, as well as a 70-year-old gentleman from California bicycling across Route 66 raising funds for childhood hunger.  And if that's not enough, the lion tamer and  his family from the Ringling Brothers circus (which is in Tulsa this weekend) stopped in!  Cool!

I found a moment to total up my May statistics.  I'm thrilled to announce that May was my best month EVER in sales of Route 66 merchandise and 2nd in number of visitors.  This speaks very well for Route 66 in general and what we can expect for the summer season.

The Admiral Twin is coming along well, after having a bit of a setback due to vandals creating havoc by breaking out windows and ruining some items in the snack bar.  Grrrr!   I drove over yesterday and snapped these photos.  Almost done! 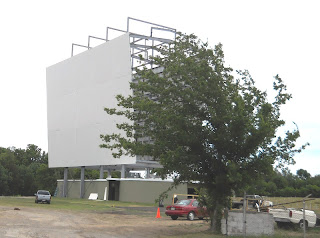 Fantastic that Afton is getting such great business! It's going to be a good summer!

We're checked in at the Blue Swallow. It's so beautiful that I'm all verklempt. Chatted with Kevin for a bit as we checked in, and I noticed an Afton Station brochure in their display. We mentioned that we had dinner with you the other night, and he said you are such a nice lady, and that you've got a great place with Afton Station and some beautiful cars. We said, "We know!" :)

So glad we were there to help with the May statistics. A new record, woohoo :o)

Now THAT is a Route 66 sign! Fantastic. Looks like you've had a great couple of days, and a great month of May as well. Congrats!