Up to the Task

Tulsa Councilor Blake Ewing is a guy who is very interested in economic development along Route 66 in Tulsa.   For this reason, he called a meeting last night of everyone he could think of who shares his interest, with the idea in mind of forming a Task Force to explore and act on ideas to boost the economy and preservation of the road.   I attended, and frankly, I was amazed!   I expected to be among a couple of dozen of us diehard roadies, whereas there were around 150 in attendance.

The meeting was held at the newly restored Hotel Campbell right on 11th St.   For a building so plain on the outside, it's downright beautiful and elegant on the inside.  Although I didn't see the individual rooms, I've seen enough pictures of them to know that they make the hotel, hands down, the best place to stay on Route 66 in Tulsa.  The public rooms are just great.   Consider staying there when passing through Tulsa. 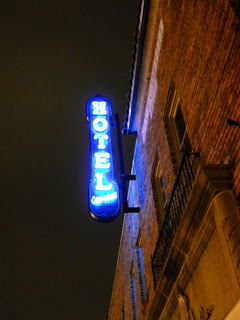 Meanwhile, back to the meeting. . .   There was a short speech by Michael Wallis, one by former Mayor Bill LaFortune, and short welcomes by a number of other city officials.   After being inspired by what we heard, we were all invited (and urged) to sign up for some aspect of the Task Force which Councilor Ewing is forming.  If everyone who was in attendance last night follows  through with the enthusiasm I saw at the meeting, I think Tulsa Route 66 will be entering into a new phase, and it's one which will be appealing to all travelers. 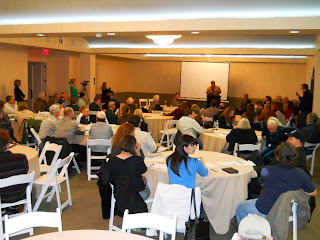 My favorite aspect of the evening was catching up with a number of folks who were active in our Tulsa International Route 66 Festival in 2004.  It really felt like Old Home Week.  It saddens me that I don't see all of those wonderful people more often.  Perhaps now that we all signed up to reactivate our enthusiasm, we'll get together more often with a common goal in mind. 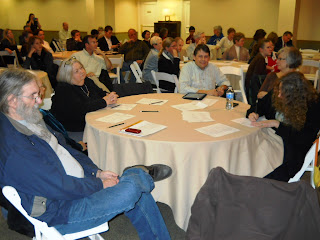 I'm sure I'll be reporting on developments often.   Hopefully, the next time you out-of-towners come through Tulsa, you'll see the results of the Task Force's efforts.
Posted by Laurel at 1:15 PM

It would be nice to this level of involvement and interest in all Route 66 communities.

It certainly would, Mike. I know that Oklahoma City has some sort of initiative started, and others I can think of that are taking advantage of Route 66 are Cuba, MO, Pontiac IL, and Victorville, CA. I know there are others as well. But we can always use MORE!

The Tulsa Task Force was the brainchild of one of our city councilors, and he managed to get plenty of people at the meeting by putting out publicity and sending out individual emails to all those who have had an ongoing interest in Route 66. We're lucky here in Tulsa because we have a rather long history of people with an interest in Route 66, a fairly strong state organization, and people like Michael Wallis and the family of Cyrus Avery who are "icons" of the road. But there's so much more we can do here! I'm just hoping that the large attendance at the meeting is an indication of how many folks are actually willing to get busy and work!

Laurel,
I'm sure you'll keep us updated, but please, also let us know what we who are not on a task force committee can do to help when there is a project that could use extra hands. I'm on the Red Fork Main Street volunteer list and have very much enjoyed getting to know the good people who are working so hard to refurbish this part of Tulsa and Route 66.

How cool is this? Love hearing of the large turnout. Sure wish I lived closer to a portion of 66.