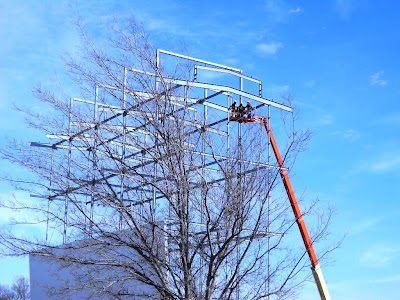 There hasn't actually been any madness today. . . yet.  I just liked the alliteration.

On the contrary, it's been a very calm day.  I drove over to the Admiral Twin after dialysis and snapped another photo.  This time the workers were in the bucket doing something at the top of the structure.  Besides that, I saw no other overt progress.

My friend Joe Meeks, who is a longtime Oklahoma historian, told me a few things about Tullahassee, the town I visited yesterday, which I didn't know.   To those following along with my explorations of all-Black towns, this may be of interest.

Here are some interesting tidbits about Tullahassee.  It was founded as a Creek mission school by Samuel Robertson and his wife Ann Worcester.  Ann's father was Samuel Worcester of "Worcester vs the State of Georgia."  That was where John Marshall found that the Cherokees were an independent people and not subject to the laws of Georgia.  Georgia was trying to confiscate their land.  Andrew Jackson said, "John Marshall has made his decision, now let him enforce it."  Hence the beginning of the Trail of Tears.  Another fact:  Ann Worcester was the first woman in America to be give an honorary doctor's degree.  It was by Wooster College and was for her work in translating English books into Cherokee.  Another fact:  Their daughter, Alice Robertson, was the first, and until Fallin, the only woman elected to Congress from Oklahoma.   In fact, contrary to popular belief, there are remains of the mission.  Or there were several years ago.  Had I known I could have shown you.  There was a well, foundations and a small outbuilding.


Thanks, Joe,, for adding to the richness of the town's history!  Next time, I think I'll just take you with me!
Posted by Laurel at 12:53 PM

I went to Alice Robertson Jr. High in Muskogee. Miss Robertson was sent to the US Congress before she or any other woman in Oklahoma (or most of the other states in the US at the time) was allowed to vote. There's an excellent display about her life and contributions to the area in the Three Rivers Museum that's housed in the old but refurbished Midland Valley Train Depot in Downtown Muskogee. That's only about a 15 minute drive from Tullahassee if you decide to go there again in search of the things Joe told you about.

My family still owns majority of the land. We lost one of the greatest historians in Lola Parker-Dean. However, she did leave us a written record and pictures of the land and was truly an inspiration in her personal and spiritual life. Names to look for Parker,Harrison,Drew and Buchanan are a few to start.