On the Sunday morning sidewalk,
Wishing, Lord, that I was stoned.
'Cos there's something in a Sunday,
Makes a body feel alone.
And there's nothin' short of dyin',
Half as lonesome as the sound,
Of the sleepin' city sidewalks:
Sunday mornin' comin' down.
- Kris Kristofferson

What's the formula for making me lachrimose?  Here are the elements required:
*Sunday morning.
*No observable sunrise -- too many gray clouds.
*Willie Nelson on the car radio.
*The Admiral alignment of Route 66 through my windshield.


When I wake up feeling compelled to cruise Admiral, I know it's going to be an emotional day all the way around. Today was such -- to the max.   To me, Admiral is the place where one can, if one has a vivid imagination, most easily imagine what Route 66 was like in the mid 20th century.  I knew that the wonderful Airway Variety Store on Admiral was about to close.  I've checked up on it now and then, but it still seemed somewhat viable.  Today, I woke up feeling like it was gone.  I was correct.   I would like you to read what I had to say about Airway Variety in this 2008 blog post:   http://aftonstationblog-laurel.blogspot.com/search?q=airway


Driving up to Airway and seeing the store empty definitely didn't make my day.  I will miss it desperately, not just for the store itself, but for what it represented.  Big box stores are taking over the world.  Little mom 'n pop variety stores are becoming a thing of the past, and Airway was one of the last, a place to buy everything from basic cosmetics to plastic flowers to parakeets.  The elderly owners were holding on by their fingernails, and it finally slipped away from them. 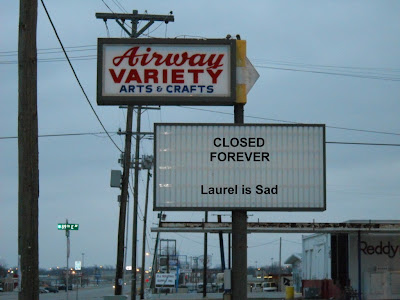 The only antidote for this kind of disappointment and depression would be a trip to see something that is coming back to life, rising from the ashes -- and in the case of the Admiral Twin Drive-In, that is more than just a figure of speech.    When the famous drive-in movie theater burned to the ground in 2010, many thought it would never rise again.  On the contrary, individual donations and tenacity of the owners overcame what was thought to be inevitable.  And here it is now. . .  the "bones" of the enormous two-sided screen rising into the air, and it's just down the road from Airway Variety. 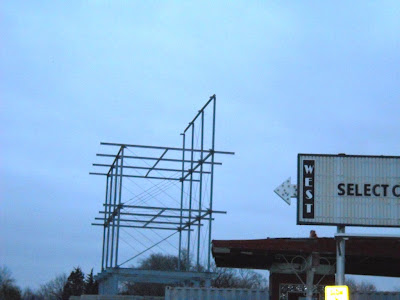 If you feel lonely on Sunday, then you can go to Church.
I'm sorry that store closed, but, I'm glad the Admiral Twin is coming back.

Been there, done that, Trevor. For many years, in fact -- until I realized I don't have much in common with organized religion. A quiet Sunday morning, alone and outdoors, with no people around is my idea of religion now.

I remember stores like that, and there really aren't many left. I'm sorry to hear that another one has bitten the dust...

...but the drive-in will never die!