I think I know why they call it "magnetic" north.   I've felt the pull of the magnet all week, and today I pointed the car north for the third time in four days.  In March, I intend to go back to Afton four days a week, so I have to get this out of my system pretty quickly.

I took a friend to the airport at 6 a.m., ate breakfast with every intention of going home and doing what I was supposed to do, and then couldn't resist the magnetic pull once again.  There is a small town in Kansas near the Oklahoma border that I've used as the setting for a novel I've been writing, off and on, for about 10 years.  It will remain nameless right now, since I'm not particularly kind to the town in the book, and when it becomes a worldwide best seller (hah!) I wouldn't want to hurt the feelings of the citizens there.

Town X (which I call Libertarian in my literary masterpiece) isn't faring very well.  It looks worse than it did four years ago when I last visited.  There's a railroad track with small grain elevator, an abandoned school, a few dozen ramshackle houses, and two churches that are both seemingly still being used.  There's one small store.  There is only one road in and out of the town.  It's a dead end, literally and figuratively, I'm afraid.  I've never seen a human being in the town. I believe, nonetheless, that it will still make a good setting for the Great American Probably-Never-To-Be-Finished Novel.  Here are a couple of photos of it.  The first person who can figure out what and where it is gets a grand prize -- an autographed first edition of the aforementioned literary extravaganza!   Whoopee! 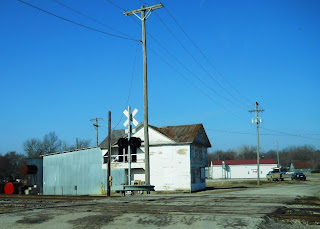 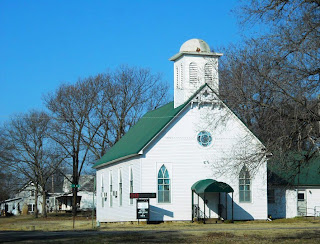 On the way to Town X, I drove through the town of Nowata, OK and stopped about 5 miles north of town to check out this this landmark, commemorating the site of the first waterflood in the state of Oklahoma.  I had no idea what that was, so I read the rather verbose explanation.  That one took a lot of chiseling!   Since it's too hard to read from my photo, I stole this slightly more concise description from a website:

Injection of water into an oil reservoir to increase recovery was first attempted on an oil lease in Oklahoma. From that effort a recovery method previously used in eastern fields was adapted to conditions found in this area. Since then, waterflooding to obtain greater oil recovery has spread to adjoining states and around the world. The city of Nowata became the hub of waterflooding for the area with most of the field activity being in Rogers County, where vast oil reserves had been proven. Billions of barrels of crude oil have been recovered by waterflooding to provide man with increased supplies of energy and fuel that could still be locked in the Earth without the industry's constant effort to improve its recovery methods. 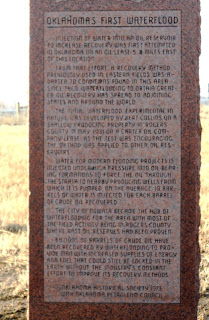 In Nowata, I also found a couple of nice old motel signs.  It was difficult to tell if the motels themselves are open and decent.  There was no activity around either one, but both appeared to still be in relatively good condition as are the great mid-century signs. 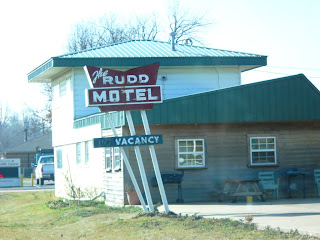 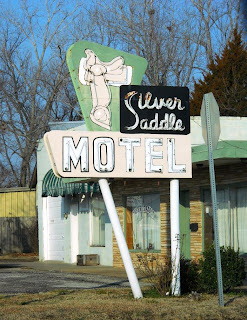 Finally, I made a quick run through Coffeyville, KS.  I didn't stop because I've been there many times before and reported on it here on the blog.  I've never found the Brown Mansion open, and this morning was no exception.  I did, however, drive up the driveway and snap this quick pic of one of the facades. Built by businessman W.P. Brown, it was completed in 1904, has 16 rooms, and cost $125,000. It's an extraordinarily beautiful home, and the rest of the story is here:  http://www.kansastravel.org/brownmansion.htm 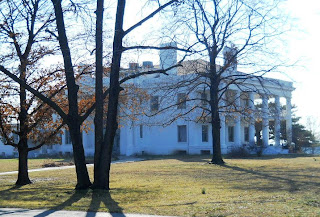 I was born in Coffeyville, KS. Grew up out halfway between Wann and South Coffeyville, near a place called Noxie. Went K-3 at Wann School (the Wann Warriors). Went 4-9 at South Coffeyville (the Lions). Went 10-12 at Lenapah (the Eagles).
Wann and Lenapah are two of the schools that were closed and consolidated into Oklahoma Union at the intersection of Highways 169 and 10.
If you drove through Lenapah you would see an old bank building. That bank was once robbed by outlaw Henry Starr, a relative of Outlaw Queen Belle Starr.

I think I recall that you once told me you were from that neck of the woods. I've been through Lenapah in the past, but next time I'll look for the bank you mentioned.