Hail Hail, the Gang's All Here

It was busy, busy, busy at Afton Station today, with visits from travelers and friends alike.  Ron M., Tattoo Man, and I held down the fort for most of the gloomy, drizzly day.  An unexpected twelve visitors came throughout the day, again a surprising number for such a dud of a February day.  They came from Pittsburgh KS, Chelsea OK, Laver Grove Heights MN, Joplin MO, and Newport RI.  The the fellow from Newport, RI is enroute to San Diego, CA where he's been stationed with the Navy.  His friend was accompanying him.  The young Chelsea, OK couple both lived in Afton in their youth and enjoyed chatting with Betty about old times.. 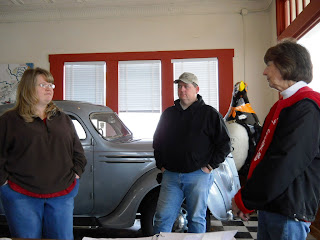 The Minnesota folks were on a family trip -- a mom and dad and three kids.  Shortly before they came in, Dean "Crazy Legs" Walker arrived and the kids wanted a photo of the guy who was the inspiration for 'Mater in the Cars movie.  As you can see, Dean could only turn one leg backwards for the photo, but the kids were thrilled. 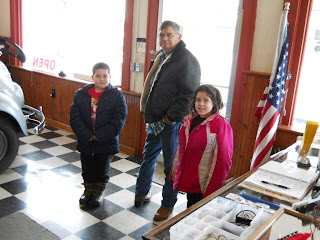 Dean had no problem posing for the photo below.  He was on  his way to Owasso, OK to practice for a Quick Draw competition which will be held next weekend.  I wish him well, but I told  him he couldn't take the pistol out of the holster while he was at the Station! 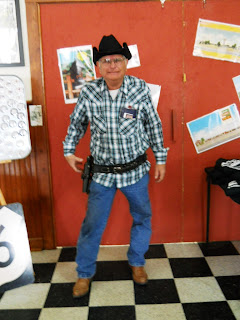 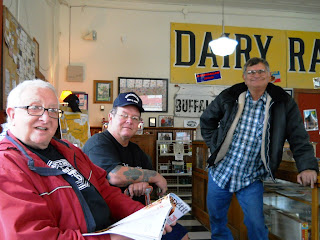 Although the above photo doesn't show it, we were busy every minute.   Toward the end of the day, our friends Ron Warnick and Emily Priddy stopped in.  The last time Emily visited, she planted a geocache on our property.  Shortly after they arrived today, two men from Missouri stopped on a geocaching trip.  As is proper, we didn't reveal where the cache is hidden on the property, but they soon found it and went on their way after a tour of the car showrooms.

The weather didn't clear all day, so we drove home in a fine drizzle.  Hey, at least it's not snow!