In my continuing attempt to visit all of the all-African American towns which remain in Oklahoma, very early this morning I headed for Tullahassee, via country roads and not the Muskogee Turnpike, which is quicker but not as much fun.  I left at sunrise so I could be home in time to tackle my to-do list for today, which is long.  Once the blazing sun rose above my windshield and my vision improved, it was the perfect time to travel.

Although there is virtually nothing left of Tullahassee, it's history is one of the most interesting of the all-Black towns.  For one thing, it's the oldest  of the remaining ones.  I hesitate to acknowledge that it's actually "remaining", although there are a few houses there that appear to be occupied.  Once again, there is no sign of commerce in the town.  The census recorded 106 citizens in 2000.  I daresay there are considerably fewer now.

Larry O'Dell of the Oklahoma Historical Society wrote this about the town:


Tullahassee is considered the oldest of the surviving All-Black towns of Indian Territory. Located in Wagoner County five miles northwest of Muskogee, Tullahassee is one of more than fifty All-Black towns of Oklahoma and one of thirteen still existing. The roots of the community were planted in 1850 when the Creek Nation built a school along the ruts of the Texas Road. Near the school, the population of Creek freedmen increased while the population of Creeks declined. The council transferred the American Indian students to another school and gave Tullahassee to the freedmen on October 24, 1881. The town was incorporated in 1902 and platted in 1907. The post office was established in 1899, with a Professor Willis serving as the first postmaster. The Missouri, Kansas, and Texas Railway line ran through the town, helping to attract settlers. Community growth was aided by the Tullahassee Town Site Company, which solicited residents throughout the South. A. J. Mason served as president and L. C. Hardridge as secretary.

The only original building left in Tullahassee is one which was owned by the A.J. Mason Co. and which has been saved as a landmark on the National Historic Register.  It was a general store built by the Mason brothers. They owned a cotton gin in the region and extensive farm land as well. 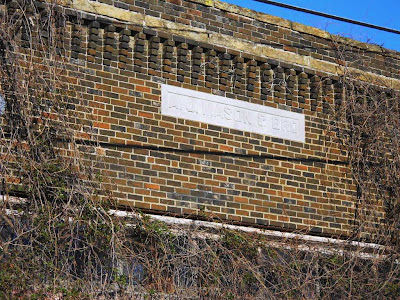 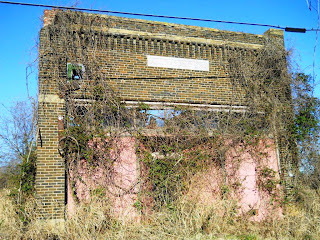 The AME church also established Flipper Davis College in the town in 1916, the only private institution for African American students in the state, but that's long gone.  Also sadly no longer standing is the building occupied by the Tullahassee Manual Labor School.  What a lovely campus building it was. 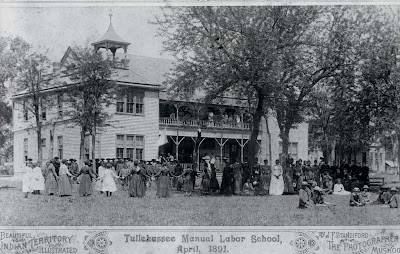 The buildings I saw were more like the one below, a home abandoned and crumbling, but with a very impressive stand of daffodils in the yard, blooming despite the February 26th date. 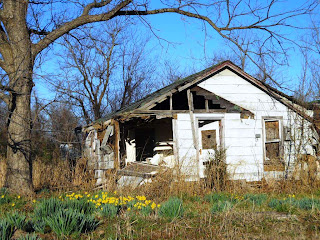 The post office seems to be somewhat provisional.  It's difficult to say whether it's a makeshift one or if it's run under the auspices of the USPS. 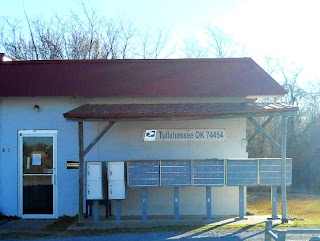 Oh, Laurel! You were so close! If you went to Tullahassee by way of Coweta you passed TWO opportunities to turn off the road, drive 1 mile, and visit Redbird, another of the All-Black communities. http://www.ghosttowns.com/states/ok/redbird.html

About Woody--I promise that some of us do know and care very much about Woody Guthrie--loved him since I was a teenager, read his books and have the Library of Congress LPs made by Alan Lomax in the 40's that I've listened to a jillion times. I scrambled the first morning the tickets went on sale for Woody's 100th celebration at the Brady, March 10th and a friend (Oklahoma ex-pat and Woody fan) is flying back to Oklahoma from North Carolina just for that occasion. I always wonder where the newspaper finds the people they survey. Hardly an excuse, but perhaps an explanation of the survey results--Woody was incapacitated with Huntington's by the mid 50's and since many Americans (most?) were born after that time . . . well, unless they're fans of Dylan or Springsteen or one of the other musicians who pay tribute to Woody, I guess they wouldn't know anything about him. Let's hope the Woody Guthrie archives that the George Kaiser Family Foundation just bought (for 3 million dollars) to be installed in a museum in the Brady District is the exposure needed to remedy this ignorance. I can assure you that "This Land is Your Land" is taught in Tulsa elementary school music classes, but whether or not the kids remember who wrote it . . . well, that's another matter!!

Oh, I did divert to Redbird, but found essentially nothing there at all. I decided to come home and do some research on it before posting about it. The only thing that caught my eye in Redbird was the yard of a house that had more "stuff" in it than just about any I've ever seen. But it was clearly from the '60s or later, and had nothing to do with the original settlement.

As for Woody, I'm wondering if the current extreme conservativism that's enfolding our state has caused people to conveniently "forget" one of our greatest proponents of what would now be considered liberal causes. Just a theory. . .

Love this blog and this entry. Great work. I posted some of your pictures on our project's Pinterest about Oklahoma's black towns, http://www.pinterest.com/struggleandhope/boards/
We would love to meet you in spring 2014.

If you went to Redbird and didn't visit the mayor, whose office is in the post office building, you missed a real treat. He was born n a hotel there 86 years ago. Have him take you on a tour of the town; he'll point out where everything used to be and talk aout why it is no more. A real joy!