Due to the extremely dry summer, here in Eastern Oklahoma we aren't having as pretty and colorful a fall as we usually have. Even so, there is still enough color on the land to make it feel autumnal. The sunrise this morning added an orangy glow to the landscape as I drove down Route 66 on the way to Afton. The air was crisp and I felt good. 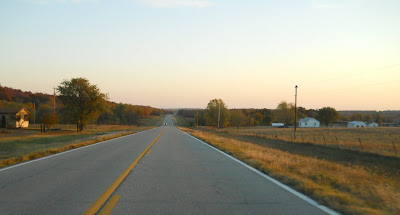 The very quiet morning at the Station afforded no clue as to how crazy it would get around closing time. Early visitors included one man from just down the road in Fairland, and then an anticipated visit from friend Larry Kinsey from Kansas City, coming through town in his new motorhome on the way to Texas to visit family. Larry is a veteran traveler who always stops to say hello if his roaming takes him through Afton. He's the guy who got me interested in playing the Indian flute. Thank goodness he didn't ask for a recital, because I think I've probably practiced for about 10 minutes since he gave me my last lesson two years ago!

There was a lull of about two hours, during which Marly and I chatted, I did end-of-month bookwork, and Marly worked on lettering for the billboard he's painting. Just as we were discussing the idea of closing 15 minutes early so I could take some flyers around town (reminding citizens of the Monument dedication on the 12th), a flood of 10 visitors arrived. They were from Miami, Stillwater, Langley, and Coweta OK, and from Los Angeles, CA.

As a result, I left Afton a half hour late rather than 15 minutes early, but I didn't mind. I enjoyed the visits of all of those folks and I'm sure happy that we hadn't closed up shop early.
__________

There's a new business in town. This sign has appeared on one of the windows of a section of the new building across the street. Marly tells me it is going to be a flea market and resale shop. Cute name! The other half of the building is now a hairdressing salon with several tanning beds as well. It's called Curl Up and Dye. Another cute name! Commerce is coming (very slowly) to our little town . . . 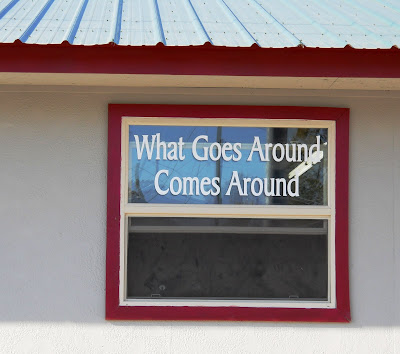