There are many advantages to being an early riser. For one thing, there are the sunrises. Those who read my blog regularly know of my affinity for a great dawn. But there are other advantages as well. This morning, as I was fussing in the kitchen at 4 a.m., I was also watching a rerun of one of last week's Jay Leno shows, and thus was introduced to Vince Gill's new hit song, "That Old Lucky Diamond Motel". Wow, what a truly great Route 66 song. Check it out at http://tinyurl.com/7j9durn.

Another advantage of jumping out of bed before sunrise is that on occasion you will find a friend who is also awake and alert at an early hour. This morning I got a very early email from Rick Thompson, who was also up and cooking. Attached to the email were a couple of great photos. Here's one that Rick took of the Waldmire mural that hangs in Afton Station. I think it's the first close-up of the map all in one shot. Very nice! 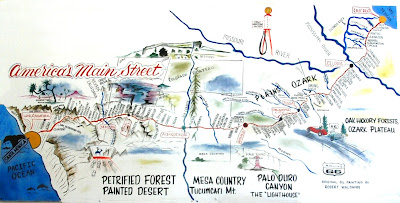 He also sent this absolutely fantastic black-and-white shot he inherited from his uncle. It was taken somewhere on Route 66 in eastern OK or possibly western MO in the '50s, when apparently people shot out electrical insulators as some kind of sport. What a hoot! 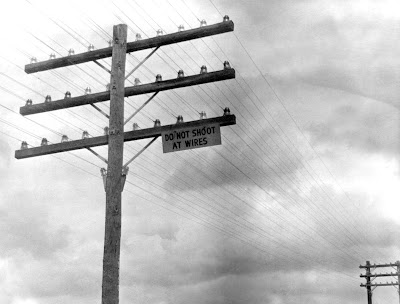 Now, back to the kitchen for more Thanksgiving preparations. Once again, I hope everyone is enjoying wonderful food among dear friends and family.
Posted by Laurel at 7:19 AM