I guess I should apologize, partially, for my unkind "harrumph" yesterday when it came to coverage of the monument ceremony by our Afton hometown newspaper. This week's edition has one more small picture, but at least this time there is one member of the Route 66 community in it -- Marilyn Emde, Executive Director of the OK Route 66 Association. The other three in the photo are Afton citizens who actually had nothing whatsoever to do with the monument. I think this is what happens when a photographer is sent by a newspaper to cover an event without properly being told who are the important elements. Maybe it's my fault for not taking the time to point out that the president and vice president of the Association were also in attendance, as well as a couple of people such as Marly who was responsible for transporting the monument 350 miles and maintaining the site. Oh well, at least folks in town know the dedication actually took place. Now, back to being thankful. . . 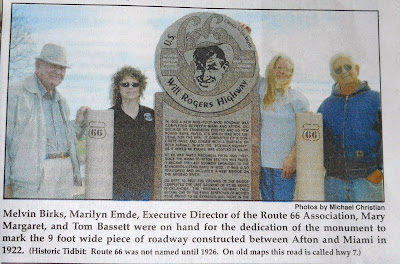