Page One, Above the Fold

Ok, so it's not the New York Times or Wall Street Journal, but we did make the front page of the Miami (OK) News-Record yesterday! The article announcing our upcoming Monument Dedication (Nov. 12) might boost attendance at the event. Now, let's see if the other local newspapers will come forward and give us some free publicity. 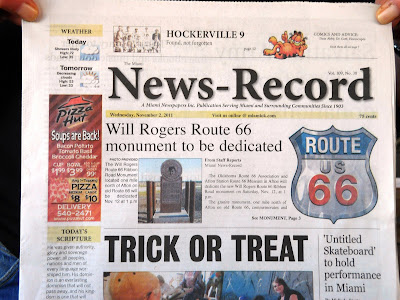 It was a slow day with only 7 visitors, but they were a good bunch. Two gentlemen from Tulsa drove up on a "fact finding mission" as they plan to organize a very large bicycle tour of Route 66. Although they intend to start small, with perhaps only a couple of hundred miles the first year, they hope to eventually extend the distance and grow the roster of participants until it becomes something like RAGBRAI, the famous ride across Iowa which often has tens of thousands of entrants. How cool it would be to have something like that come through Afton on Route 66. Start training!

A local lady named Clarissa came in to introduce herself. Although a recent resident of Afton, she has fond memories of the town from her childhood. She is attempting to start up a photo business in which she would offer to take photos of travelers in front of their cars (or our cars, or our building) and then imprint them upon mugs and other items. Sounds promising and we said we'd help her in any way we can.

Our other visitors came from Tulsa, Grove, and Salina, OK. One gentleman was especially interested in and knowledgable about Packards. All visits were pleasant and much appreciated. Even so, each day I see a reduction of visitors. Yesterday, Robin greeted 12 folks, but all were relatively local except for a party from Toronto, Canada.

Joe Sonderman was kind enough to allow me to use his image of the Buffalo Dill's sign. Buffalo Dill's was an Indian trading post back in the heyday of Route 66. It was located 9 miles east of Vinita, which would make it 6 miles west of Afton. That would put it at the bend known as Dead Man's Corner. I plan to find out more about it from locals. Interesting! 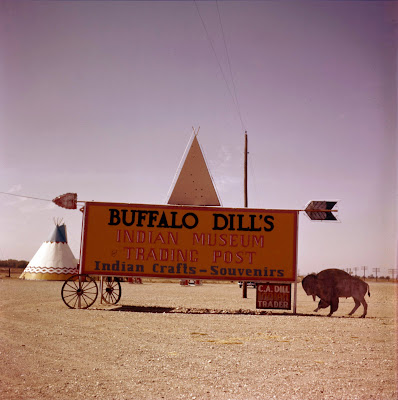 I have a black and white postcard of an aerial view of Buffalo Dill's if you would have any use for that, assuming you don't already have it.