The morning drive wasn't too bad, considering the tornado sirens were going off and there was an extraordinary amount of wind when I left the house. I waited until the wind died down a bit, then made a run for it. (It turns out that what were called "straightline winds about 80 mph" when I left the house were later labeled as tornadoes! More on that later.) Apparently I left just at the right moment, because my drive to Afton was relatively unaffected, and I didn't see any wind damage (although I left at 5:30 a.m. so it was still dark).

The Birds and the Bees: Marly was at Afton Station when I arrived at 8 a.m. He told me that after I left on Tuesday he remained a while and was enlisted in the bee removal effort. The beekeeper came dressed in his whole bee suit, but needed Marly to help remove the sign they were on so that he could catch those that were underneath. He instructed Marly that the bees wouldn't hurt him if he didn't make any quick movements and if he kept his eyes open only a small slit. He did so, and although the bees were bombarding and crashing into him, he wasn't stung. There were twice as many bees under the sign as there were above it, but the beekeeper was very efficient in gathering them in boxes and returning them to his hives.
Marly also showed his efficiency in the matter of birds today. When a poor little bird flew into the door of the Station this morning, Marly was there to fix the problem. He trapped the bird in one corner, then "shooed" him toward the door. It worked. I don't know what we'd do around there without Marly!
We were short on visitors today (not unexpectedly, due to the weather) but long on activity. Tattoo Man and Betty W. were there for a while, and David, Marly, and another helper were here all day and busy as bees. (Groan!) Some yard trimming got done, as well as some extermination. Marly was busy polishing the trim on my boat, and waxing the cars in the showroom was being done. It was a hive of activity. (More Groan!)
We had 6 visitors today. The first couple, from Locust Grove, OK were tailor-made for Afton Station. She's a big Route 66 fan, and he collects D-X gas memorabilia! Needless to say, they both enjoyed their visit. Here they are. 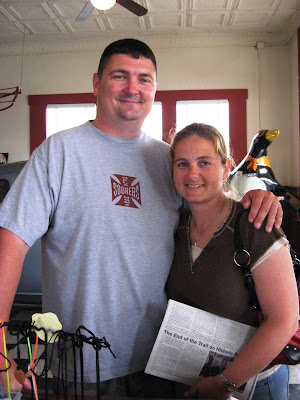 Another couple, from Warren, OH were from the National Packard Museum there, so you can imagine how much they appreciated our little Packard island in the middle of Oklahoma, too. He has a Packard himself, and they're both on the Board of the museum. Our final two visitors were in the area on business but decided to take a break and visit us. She was from Fayetteville, AR and he from Jenks, OK.
_________
Here are a few pictures of the Tulsa tornado this morning.Video Tornadoes Confirmed In Sapulpa, Broken Arrow, OnetaNewsChannel 8. It came within 1/2 mile of Ron M.'s house. Thank goodness he is just fine.
Here's "my" field this afternoon. The rain is encouraging growth! 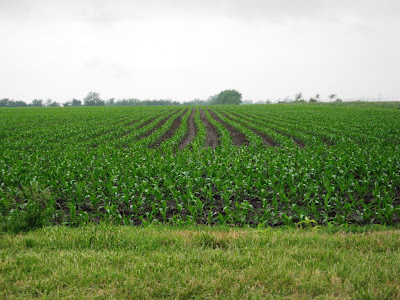 Glad the twisters didn't hurt you or our other brother Roadies.

So, "HONEY", at lunch did you "EAT LIKE A BIRD" before returning to your "NEST"?