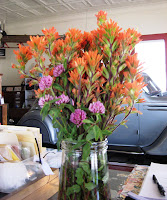 I'll probably overuse the word "nice" again, but it's descriptive of every person who visited Afton Station today. All were on best Mother's Day behavior and all seemed to be having relaxing, enjoyable days. Also, it seemed like everyone was looking for a place to eat. Afton sure could use a diner!
Thirty-seven visitors came from Manchester MD, Streetsboro OH, Aurora OH, Ossseo MN, Naples FL, Groveport OH, DesMoines IA, Oscola MO, Woodstock IL, and Watts, Tulsa, and Nowata, OK.
I was alone today, so not many photos were taken. Some folks who arrived at the Station yesterday after I'd closed and couldn't let them in because I'd already set the alarms came back today, and I was so pleased. They're from Manchester, MD and have gone across the country in their little Smart car. They stayed in Baxter Springs last night and drove all the way back to visit Afton Station this morning. Also, early this morning I was visited by five folks from Watts, OK out for a Mother's Day drive in the country.
I had some cleanup to do this morning as I didn't get to straighten up after the Studebaker people left. I did the tidying up early and everything was looking good again before the tourists started arriving. We now have a new "giveaway" thanks to Ron M., who yesterday brought a big box of dog biscuits for our visiting canines. So be sure to bring your pups when you come to visit!
Two extremely nice truckers, driving tandem from Ohio, stopped. They both lived pretty close to where I grew up near Cleveland, and one of them was even familiar with the street on which I was born! Both are Cleveland Indians fans, too. Yay!
Two bikers from Tulsa dropped in on their way home from a Moto Guzzi gathering and campout in Missouri. Beautiful Italian bikes! 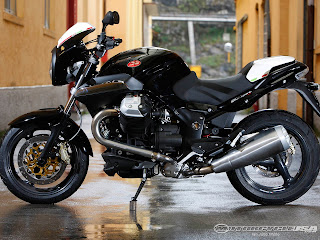 A couple from Florida in a big motorhome bought a ton of stuff. Can't complain about that! An antiquing couple stopped by while cruising around looking for flea markets and antique shops. A lady from Woodstock, IL stopped, too. She's traveling solo the entire length of Route 66. Kudos to her!

And then, at the end of the day, 15 motorcycles pulled into the Station, very unexpectedly but VERY welcome! It was the Des Moines IA chapter of the HOG group, returning from a multi-day cruise. What a fun bunch of guys! Here are some of their bikes. 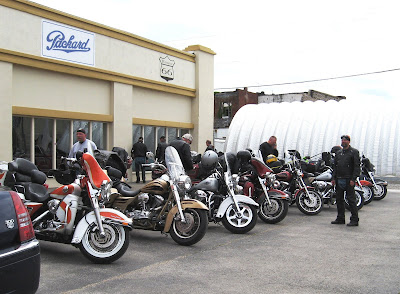 Finally, here are some goats attacking a pickup. I just had to stop and watch the goats line up for chances to mount the front end of the truck. It was funny! 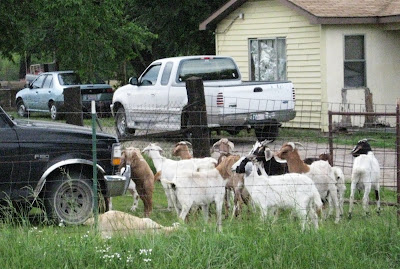