Afton has a lot of birds. At least there are always plenty of them around Afton Station, causing me to wonder if they live in the old Pierce-Harvey Buggy building across the street. The windows are broken out, and sometimes we see birds flying in and out of there. There aren't many trees in the neighborhood, but there are always birds taking advantage of our "perpetual puddle" (which we call Lake Afton) for taking a drink or a bath. 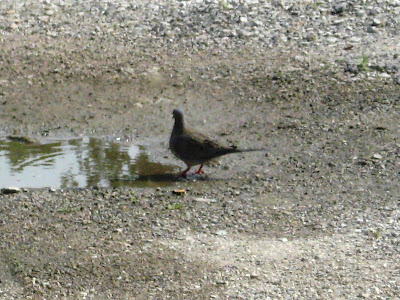 They also seem to derive pleasure from pooping on our gas pumps. 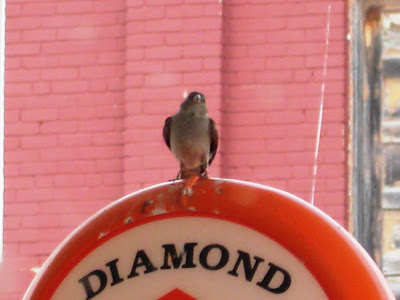 When the town finally repairs the broken culvert that's causing the puddle, will the birds leave? I hope not!

Frankly, I'm wasting time this morning. I've already had my first visitors, a lovely couple from Appleton, Wisconsin who are doing the Route. I should use this time to dust the showcases, rearrange and restock merchandise, and do something about the disgustingly grungy floor. But those who know me know that I tend to be a lazy bum, so I think I'll just do a couple of crossword puzzles until the next guests arrive.
____________

It was another relatively slow day. It was also the first day with doors closed and A/C on, which always gives me an isolated feeling. I'd much rather have the door open so I can hear the birds (and the trains!) But the temperature is in the upper 80s, so open doors aren't an option.

I ended up having only 8 visitors today. They were from Appleton WI, Heperia CA, Baxter Springs KS, and Mantua OH. The Californians were using the wonderful EZ66 Guide which, as one of it's features, lists all the "giants" along Route 66. They were excited about seeing Tripper, who has been suffering in his little corner from some neglect lately. He was thrilled to get a little attention today.
____________

Gordo, the Photographer, was here on Sunday and stayed at my house on Sunday night. He and his friend Larry are heading west on Route 66 on their motorcycles. As I was leaving early Monday morning (pre-dawn) I snapped this pic of Gordon's rig. It's not much of a picture, but it shows his large trailer and cooler setup. 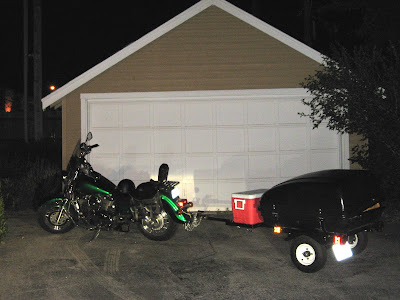 Speaking of Afton birds, what was the name of the unusual birds Betty pointed out to us one day? The ones with the long legs......

I can't remember. Was it a plover?

I know there are a lot of people that do the route by motorcycle, we are going to do a convertable instead.