First, I wish to let everyone know that I'm indeed safe and unharmed, as are all others I know, after the outbreak of tornadoes which hit Oklahoma last night. Although, sadly, five people lost their lives in the storms, here in Tulsa we were spared. Nothing significant occurred in Afton either.

Today at Afton Station things were relatively calm, both in weather and activity. We had 11 visitors who came from New Stanton PA, Montreal Quebec, Riverton KS, North Olmstead OH, Vinita OK, and Ramona OK. Dean "Crazy Legs" Walker came for a visit and brought a buzzer for the snake cage that he presented to me a few weeks ago. Shortly after he arrived, his mother walked through the door. It was nice to meet her for the first time. Marly was here working on the trim for my boat, a '57 Herter Flying Fish. Ron M. was with me today and brought a new whirligig for the sign. It's red, white, blue, and huge! I'll take a picture another day. Betty W. also stopped in for a while.
The real fun began in the afternoon when Marly, who was gazing out the window at the time, suddenly got an amazed/horrified look on his face. Bees! Sure enough, across the street, an entire large swarm of bees had made its temporary home on the rental sign at Forklift Man's place. It's amazing how fascinating a swarm of bees can be! We spent the better part of the afternoon watching their moving and shifting from afar. 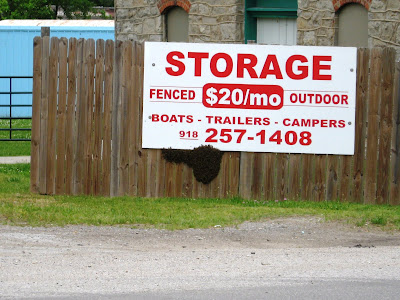 As we were leaving, we drove across the street and viewed them more closely from the safety of the car -- close enough to get a decent photo but far enough away so as not to harm or disturb them. 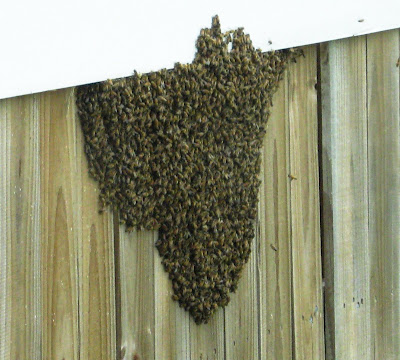 Looks like another closed business in Afton. The little laundromat behind Afton Station is locked up and seems to have been abandoned. One more down. :-( 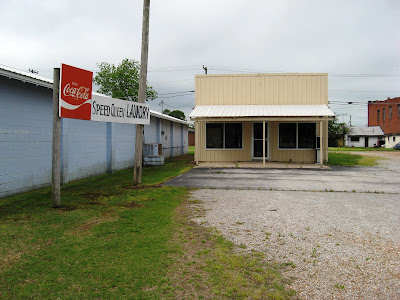 I've heard that bees will do that...just stop in a place for a while and then move on. I'll be curious to see how long they stick around.

I won't be in Afton today, so I might miss their departure. I'll report on Thursday.

Beth, a swarm occurs when you have two queens in a hive. One will either kill the other, or one will leave and take half the colony with her. When that happens, the bees will stop in a convenient location -- usually not too far from their old hive -- and stay put while a few scouts go out looking for a good place to set up housekeeping. It is critically important that they find a new home as quickly as possible so they can begin building comb, rearing brood, and producing honey to get them through the winter.

They typically stay in one spot for a few hours -- just long enough for the scouts to find them a home.

You are actually far less likely to be stung by a swarm than by individual bees. Part of this is physiological (before they leave their old home, they stuff themselves with honey until their abdomens are so distended that they couldn't bend their butts around to sting you if they wanted to), and part of it is psychological (without a hive, they have nothing to protect, and they are too preoccupied with finding a new home to care what you are doing).

Laurel's swarm is pretty impressive. We caught a swarm in our backyard a couple of weeks ago, but it was much smaller. We were lucky to find them and get them safely ensconced in a new hive before they took off.