Croak!   That's how my voice sounds today.   If I weren't
"the boss", I probably would have taken a sick day.   My throat hurts, I don't have much energy, and my eyes are red and runny.  It's just a cold so I should be fine soon, but this morning it would have felt really good to just roll over and catch another hour of sleep.  Since it was to be just me at Afton Station today, I had no choice but to make the long drive.   And I'm SO glad I did!

It turned out to be a great day.  I arrived an hour early again (once I was awake, I might as well just shower and get on the road) and awaiting me in the driveway were two great looking Corvettes being driven on a Route 66 trip by two couples from S. Dakota.  They're doing the Route in segments each summer, and seemed to be having a ball. 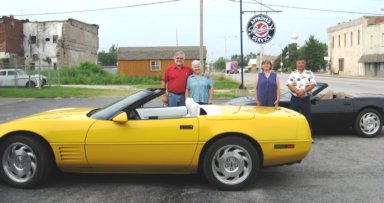 Next came Marly, who stayed for an hour or so and we discussed ordering the parts for the gas pumps.  We checked out a couple of catalogs.  It's pretty nice to know that there are a number of companies who deal in repro parts for vintage pumps as well as original stuff.   Here's Marly measuring for parts. 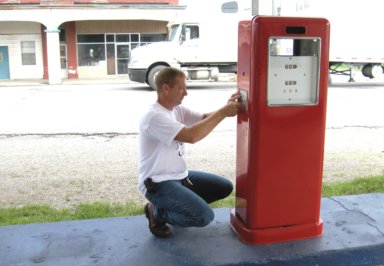 Visitors kept coming and going, with a few interesting coincidences.  For instance, right after the group from S. Dakota left, a group from N. Dakota arrived.   Since those two states barely have populations and very few have visited the Station, I thought it was pretty cool.  Also visiting were two separate groups from Australia.   The second was a couple on their 6-week honeymoon in the U.S.   Wow, must be nice!

Betty came by and kept me company for a while. Some local people dropped by in their beautiful '48 Austin A40.   Here 'ya go... 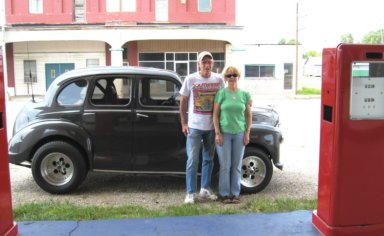 Things really got weird when a local couple who've visited before came by.  I hadn't seen them for almosta year because, as it turns out, the husband has been having health problems.  While they were there, a young man came in by himself.   The young man and the older gentleman exchanged hellos, and then the older man asked the younger man's name.  When told, the older man said "I thought so.  You're my cousin".   The young man apparently didn't know that, so there was yet another family reunion to occur under Afton Station's roof.

A year or so ago, we got to know an Afton family who for a time had a taco wagon which they parked outside of the Station and from which they produced and sold the most delicious enchiladas, tamales, etc.   But for the past year, they seemed to have disappeared from the face of the earth and I figured they'd moved away.   What a surprise when they arrived today, bringing with them the reason for their absence -- an adorable 5-week-old baby girl, Jasonia! 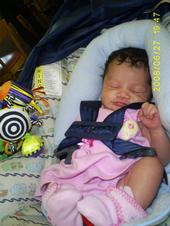 There were about 30+ visitors today, and all so interesting that for a time, I was able to forget my malaise.

And finally, you know the big wind turbine farms which are (thankfully) being constructed all over the American countryside as alternative power sources?  Have you ever checked out the blades on those things close up?   Wellllll.... exactly three trucks carrying the blades (two blades per truck) pass by Afton Station every Sunday, without fail.  I don't know if they're manufactured around here or if there's a wind farm being built in the area, or maybe Route 66 is just their preferred route of transit, but at any rate, I was finally able to snap a picture of one of the passing trucks.   I'm in awe of the size of those things! 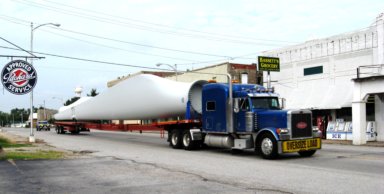 Sounds like a great day...makes me antsy to hit the road!

I can't believe how big that turbine blade is. Whoa! I also noticed the service sign off to the left--is that a Packard sign?

There are actually two on the truck, end to end.   They are, of course, a "Wide Load" with a lead truck in front and a following truck in back, both with flashing lights.  It's quite impressive to watch them go by!

What a lovely little lady Jasonia is!  It must have been fun to see them again.  Thanks for the great pictures.  Sue

A park in Weatherford, OK, has one of the big blades on permanent display at ground level. You can touch it, measure it, or just stand by it and be impressed with its size.