Busy and varied weekend... love it!

I didn't post my mood again today, up at the top of the blog where I'm asked to fill in the "Feeling ____" blank, since once again my choice would have to be TIRED, and I didn't want to admit to being tired two days in a row.  But (sigh....) I am.  After two busy days at Afton and a very festive night at a fancy restaurant in between, I'm ready to do a little chillin', but not until I do a little blogging about this weekend.

It rained all day on Saturday, and since we've had so little precipitation lately I was really relishing the sound of the cars splashing along on Route 66 and that incomparable scent of rain in the air.   Today it was nice and cool in Afton and we were able to turn off the A/C again and sit outside for most of the day.  It started raining again just as we were heading home, and drizzled for the whole ride back to Tulsa.  We need it, so no complaints.  The rain on Saturday didn't stop the folks from coming in, either.

This was the kind of weekend which reinforces for me the reason I bought Afton Station and set up the Visitors' Center.  Among the parade of interesting visitors we had:  two groups from Paris (that's Paris, France ... not Paris Kentucky, Ohio, or California), a preacher from North Dakota who seemed quite worried about the prospects of my salvation, two guys doing the Route in a very spiffy Corvette convertible, a guy from Maryland who was treating himself to a Chicago-to-LA road trip to celebrate having finished the Bar exam, a couple from Wichita who were amazingly well-versed on Route 66 despite this being their first trip (they did their homework... hurray!), a guy from Connecticut who got special attention from me because I moved here from Connecticut and see VERY few Nutmeggers around these parts, a group of cousins who met here for a family reunion despite some of them never having met one another previously, as well as plenty of other groovy people.  It just makes me so  happy!

On Saturday, a surprise guest was Ron "Tattoo Man" Jones and his wife Roz who showed up on that expensive trike again!   He just had to take one more test drive, and he wanted to show it off to Roz.  Roz enjoyed the ride, but said absolutely "NO WAY" to the purchase of the thing.  Hmm... we shall see.... (We also got to see his new Tow Mater tattoo, his 70th!)

On top of that, I bought a new mop and Ron, who was with me today, mopped the whole floor.  You'd be amazed by how filthy that black-and-white checkered floor gets after a few days... or weeks.  Along with all the other help he gives me at the Station, his mop job was most appreciated.

Finally, the picture of the day was sent to me by Cordula and Bernd, folks who visited Afton Station from Germany a couple of weeks ago.  The accompanying email said

"We enjoyed our trip, 2448 miles without a breakdown and only one hour of rain. A nice country you live. We´ve learned a lot of the street and the meaning for the people who live there. With people like you the spirit of the road will never end. It is good to have some people like you!!!" 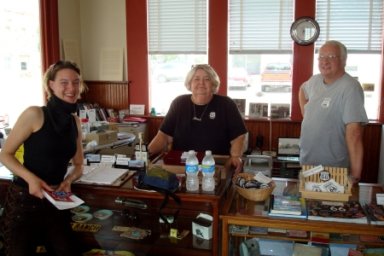 That's pretty Cordula on the left, me in the middle, and Ron McCoy on the right.