Out-of-body or Out of my mind?

Out-of-body experiences happen to me almost every time I drive alone between Afton and Tulsa, which means between 4 and 6 times a week.  It doesn't happen so much when I have a passenger, but but when I'm completely alone in the car on certain stretches of the lonely road, I have a strange thing happen.  I realize that those of us who are avid Route 66 fans would rather not think of our road as "lonely" because that indicates lack of travelers, lack of interest, lack of business, etc.  But let's face it, I can sometimes go a mile across the long straight stretches of grazing land and see only one or two vehicles coming toward me, particularly in the early morning.  It is then that the out-of-body stuff occurs, although some might say I'm more out of my mind than out of my body.  But here's what it's like, albeit hard to explain.  Momentarily, I forget where I am and where I'm going.  Don't worry, it's not an Alzheimer's-style forgetfulness.  It's more like a displacement, and it's actually very pleasant.  Realistically, I know where I am at all times, but my mind carries me elsewhere.  Instead of driving down the same road with the same sights, day after day, I am projected to another place -- maybe one of the equally straight and lonely roads across the Kansas wheat fields I love so much or, oddly, across a long straight highway through the Florida Everglades, where corn fields become live oak hammocks and cows become alligators.  I guess this means that when I'm on Route 66 I'm not always on Route 66, and I further speculate that the odd experience is nature's way of relieving the monotony of the same old sights. (Wow, who'd ever think I could become bored with any part of the Mother Road!)

My first visitor at the Station today was the guy who does the asphalt work on our driveways.  He's a very nice guy, so I was shocked to learn that his was one of the homes which was completely blown away by the tornado that devastated Picher this past May.  I was mesmerized as he told me about how he and his 80+year-old father lay on the floor of a neighbor's house while both houses were totally flattened in about 15 seconds.  Although several Picher residents lost their lives, he and his father and the neighbors were spared.  His trucks and his business blew away too, and he was left with no possessions other than the shirt and pants he was wearing.  His advice was simply "Get as low to the ground as you can when you hear the winds coming."

Betty came by and brought me some more honey (yum!) as well as the loan of Afton phone books from 1953 and 1956.  We went through the phone books page by page (easy, since each is only 20 pages long!) and pulled out all the service stations, motels, and restaurants on Route 66 in Afton.  By our count (not including those without listings of course) and helped along by Betty's memory, we came up with 8 restaurants and/or bars, 6 service stations, and 7 motels existing during the '50s.  There were also at least two grocery stores (only Bassett's survives) and Johnson's Hospital, long gone.   All but one motel and one cafe on the outskirts of Afton are out of business or entirely gone.  Sad.   Here are some ads from those phone books: 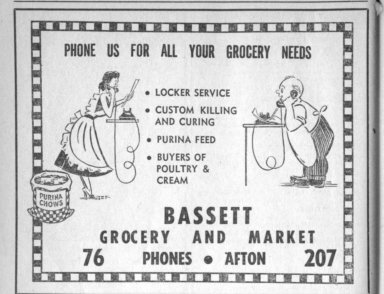 From the 1956 phone book. (Note that the phone numbers now have letter prefixes, which they did not in 1953)

Don't think you'd want it to be too busy either, then it wouldn't be the route 66 you know and love.