It was Italian Day at Afton Station, with two different groups from Italy stopping by on Route 66 trips.  Both carloads were doing the full Route, from Chicago to L.A., and were young, energetic, and the guys were (ahem) cute!    We also had about 35 domestic visitors, mostly from not too far away, and many were on their way to a big car show in Vinita.  (After we closed today, we drove past the car show there, and it was indeed big and seemed to be well-attended, despite the 104-degree heat).  Marley took one of David's cars to the show, the Studebaker.  I'll bet it wins an award. It was looking SHARP!    Friend Ron Yockey was one who stopped by on the way to the car show with one of his vintage vehicles. 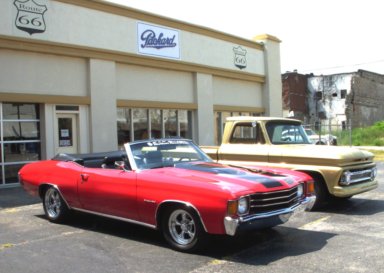 Here are a couple of the cars that visited today.

Ron "Tattoo Man" Jones arrived and told us he was going to leave for a while and come back with a surprise, but we goaded him into telling us that the "surprise" was that he was going down the road to take a test drive in one of the very expensive trikes they're now selling down there across from Buffalo Ranch.  He drove it back for us to see. Here's a pic of the machine -- $33,000 gets you three wheels, air conditioning, heat, a stereo system, and a steering wheel! That's a mighty fancy motorcycle, if you ask me.  Tattoo assured us that he's not planning to buy one. (He also said  he had it up to 90 mph on the way back to the dealership, but I won't tell...) 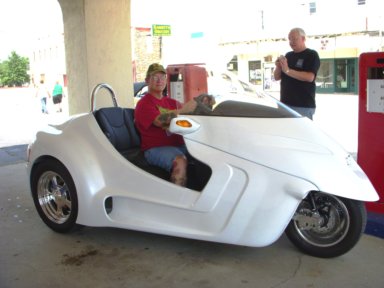 On the way home, we stopped to take a few more pictures of the Avon Courts.  Here they are. 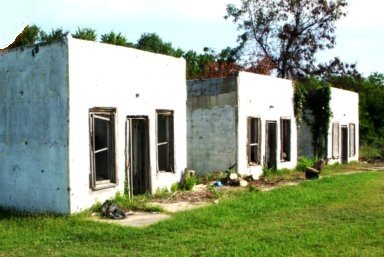 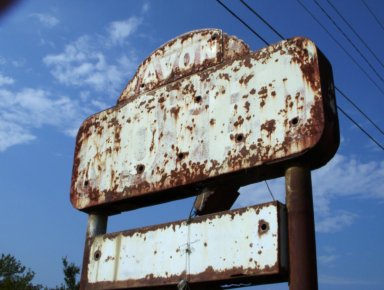