The Labor Day weekend so far

Lots to tell, but I'm demoralized by the fact that I just lost two days worth of journal by accidentally hitting a wrong key and deleting it, and I don't know if I have the strength to repeat it all.   So, here's a summary:   The motorcyclists never arrived, after all my planning and rearranging of schedules.   I suspect it's because they were having a big thunder/lightning/hail storm up in MO.  But if they'd been able to get past the Oklahoma border, they would have found fine weather here all day.   No worries, though.   I had a great day, with Marly and Betty with me most of the day and a parade of interesting visitors.

I spent the night at the Chelsea Motor Inn.  I drove there for a short nap after Afton, then drove back to Grove to have dinner with David and Sylvie.   Some time ago, Trudy of the Chelsea Motor Inn had shown me a fantastic Route 66 quilt made by her mother.  When I arrived there last night, there was one waiting for me!  Instead of a long description, I'll post a photo of it as soon as I can take one.  It's wall-hanging size, and I also have two of them to sell at Afton Station.

I got up early, craving a huge breakfast.   The sunrise was lovely. 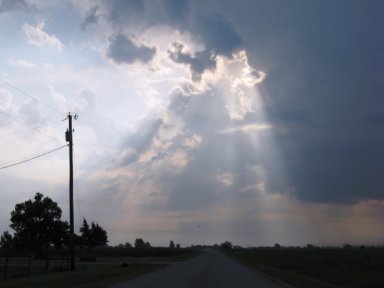 Since I was in the mood to have breakfast with cowboys, and since the Will Rogers Rodeo is in Vinita this weekend, I decided that Clanton's would be the perfect spot.  So, with a voluptuous bacon omelet and a cup of coffee in front of me, I compiled the following observations and opinions:  I can't tell the cowboys from everyone else.  There was cowboy talk coming from guys with John Deere caps and farm talk coming from guys with 10-gallon-hats and even rodeo talk coming from obvious touristas with northern accents.   I just gave up and ate.   When I'm in one of these "romance of the West" moods, I need to be able to tell a real rootin' tootin' cowboy from everyone else.

After breakfast I drove down to the rodeo grounds, but everyone (human and beast alike) seemed to be still sleeping -- except the bulls!   Here's one particularly nasty looking one, photographed through a very sturdy chain link fence.  (When they paw at the ground, that's bad, isn't it?) 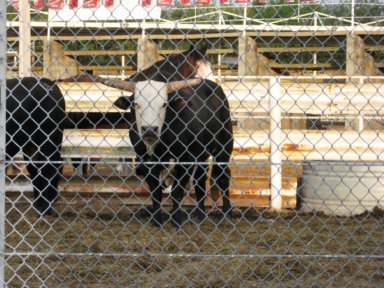 Here's one rig I saw parked outside the rodeo grounds.  Probably not a cowboy's.  :-)

It was a busy day at Afton Station with some truly extra special guests.  Here's Anton from the Netherlands, who's doing a "preview" of the Route so he can bring his family over next summer and be ready to show them just the highlights. 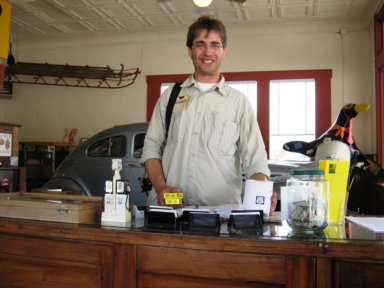 Here's possibly my all-time favorite visitor, Derek from Houston who arrived in his super sharp BMW convertible, and before he left about 90 minutes later, we were dancing in the street outside the Station as we listened to Mark Curran's Route 66 CD on his car stereo.   Yes, really.  What a cool guy.  Here he is with his souvenir roll of Afton Station toilet paper. 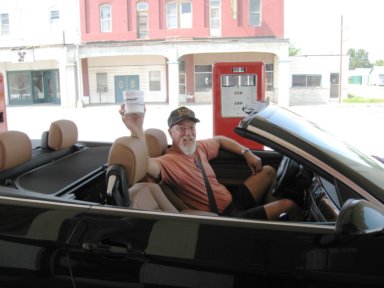 This is a very short synopsis of a very full day, but I'm so tired I can barely type, and it's back to Afton again tomorrow to finish out the weekend.

Laurel, sounds great! I loved the pictures. A couple of things about the picture of Anton: I believe that's a Route 66 salt and pepper shaker on the left--I have one, too, and the little Route 66 sign lights up! And what's up with the penguin on the right?! I love that, too, because I also collect penguin figurines. LOL!

Derek looks like he's having a great time, and who can blame him? Tooling down the Road in a convertible...?

Beth,
The penguin isn't a figurine.  It's actually 7 feet tall, but the perspective of the picture makes it look like it's on the counter.    I bought it from the Tulsa Zoo so I could have it up there at Afton Station.   The cute salt and pepper shakers were a gift from a friend.  Everyone wants to buy them, but of course they're not for sale.  I love them!
Laurel